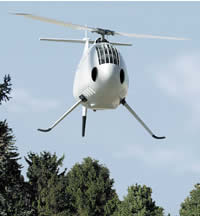 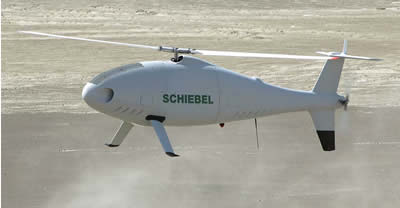 S-100 UAV System has been developed to carry various sensors for both military and civilian applications. The UAV can be launched automatically performing Vertical Take Off and Landing (VTOL), eliminating the need for special equipment and preparations at the launch and recovery sites. The helicopter navigates by following preprogrammed GPS waypoints, it can also be operated manually by the pilot. The fuselage is constructed of carbon-fiber monocoque providing maximum capacity for a wide range of payload/endurance combinations.

The Unmanned Research and Technology center (UAVRTC) at the United Arab Emirates (UAE) has ordered 40 Al-Saber UAV systems (Austrian made Schiebel S-100), each comprising of two unmanned helicopters and a ground station. In March 2006 Al-Saber UAV completed acceptance tests in the UAE, where it met all performance requirements, including flying at an altitude of 13,000 feet (3,962 m’) with almost full gross weight. Airspeeds in excess of 100 knots (185 km/h) were demonstrated, with mission endurance of six hours carrying a 25kg payload. The trials were conducted at average temperature of 35˚C deg. and surface winds of 25 knots.

When performing security missions, Al-Saber UAVs will be equipped with a stabilized gimbal, based on the IAI/Elta POP-300 day/night payload, fitted with daylight and night thermal observation equipment. The payload is installed in a primary payload bay, which is configured to carry loads of up to 50 kg. The helicopter can also mount an additional forward looking camera for pilot orientation. The UAV can also accommodate other payloads, including multi-spectral sensors,Synthetic Aperture Radar (SAR), Laser Imaging radar (LIDAR) and Ground Penetrating Radar (GPR).

The unmanned helicopters will be used for military and security operations, providing ground and maritime surveillance missions. The Emirate’s expanding UAV strategy now comprises several programs, including the South African Denel Seeker UAV, and the CybAero Apid 55, from Sweden, which will be locally assembled in the UAE. Parts of the fuselage of the Al-Saber UAV will also be produced in the UAE, at a new production facility Schiebel constructed here. UAVRTC is cooperating with South Korean expert Uconsystem, to develop a common ground control station to support all UAVs.