Home Aerospace Aircraft Tankers and Transports at the 2007 Paris Airshow 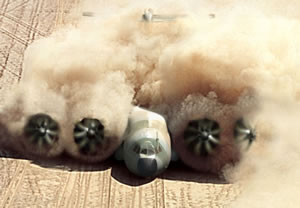 In contrast to its reduced commercial exposure, EADS and its Airbus Industries subsidiary had a strong military presence at the Paris Airshow, highlighted by the first appearance of the mission-equipped KC-30B, which, according to Ralph D. Crosby, Jr., Chairman and CEO of EADS North America is “the world’s most capable military tanker”. The aircraft on display was recently completed for the Royal Australian Air Force (RAAF).

It is outfitted with its fly-by-wire Aerial Refueling Boom System (ARBS), along with two underwing hose and drogue refueling pods. This aircraft recently completed ground testing to validate installation of its refueling equipment package and has begun flight evaluation program, leading to its eventual delivery to Australia. The KC-30B combined aerial refueling system will enable the RAAF to support its own fighters, strategic airlifters and AWACS assets, while offering full aerial refueling compatibility with other U.S., NATO and allied military aircraft. Its configuration is similar to the Northrop Grumman KC-30 Tanker, which is being proposed for the U.S. Air Force KC-135 tanker replacement program.

A smaller aerial tanker from Airbus, based on the A310 is the Multi-Role Tanker Transport (MRTT). Four such aircraft are on order for the German Air Force, one of them participated in the flight display over Le Bourget. The German tankers carries a pair of underwing hose and drogue refueling pods, configured to provide tanker support for probe-equipped military aircraft. A refueling operator’s station is located in the cabin behind the cockpit. Another A310 which participated in the flight displays, was the Aerial Refueling Boom System (ARBS) testbed, which already acquired over 100 flight hours with the new ‘fly by wire’ boom system.

Another tanker to be added in the future to NATO air forces will be based on the A400M military transport aircraft, currently under development. The long awaited A400M did not make it to this year’s airshow. The aircraft is currently on final assembly in Spain, and is scheduled to fly within less than one year. Hopefully it will be available for flight displays in the next Farnborough Airshow (2008). To date, Airbus Military has received firm orders for 192 aircraft from nine customer nations. This new, multi-role military airlifter will replace the ageing fleets of C-130 Hercules and C-160 Transall still in service with some of the NATO air forces and other air forces around the world. The A400M almost doubles the payload and volume of the aircraft it will replace. It will be configured for three principal mission profiles – strategic operations (long range, large capacity, high cruise speed) tactical missions (soft-field performance, autonomous ground operation, low speed / low level operations, aerial delivery) in-theatre aerial refueling services.

Boeing is sending its C-17 Globemaster III to every airshow in a last attempt to win international and US government support for its continuation of the program, which will reach its end, pending further orders. The aircraft is performing well, supporting coalition operations in Southwest Asia and Iraq and while funding is not available for more aircraft, the need for its continued services is widely recognized.

In contrast to Boeing’s Globemaster III demise, Lockheed Martin’s C-130J is becoming a hot seller on the world market. “The C-130Js is delivering ‘last mile’ intra-theater support supplies to remote operating bases, keeping trucks off dangerous highways and carrying tons of supplies non-stop for thousands of miles,” said Jim Grant, Lockheed Martin’s vice president of business development for Air Mobility and Special Operations Forces. The aircraft offers greater operational efficiencies than the older C-130s by flying further, faster, with more payload and higher reliability. Additionally,
the C-130J only requires three crew members for most missions so fewer flight crew members are exposed to potential threats in theater. The Hercules will soon be augmented by the C-27 Spartan Light Transport Aircraft, recently selected recently selected by the U.S. Army and the U.S. Air Force for the Joint Cargo Aircraft (JCA) program. The Spartan will replace the Shorts C-23 Sherpas, C-12 and C-26 aircraft. The aircraft was one of the impressive performers at Le Bourget demonstrating typical short takeoff and steep landing maneuvers. 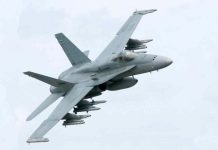 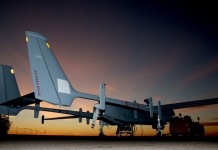