The Boeing Company [NYSE: BA] is reviving the X-45 unmanned aerial system to be used for testing and demonstration of advanced unmanned air system technologies, under a company funded research program code-named ‘Phantom Ray’. First flight of the Phantom Ray is expected in early 2011, following an air transfer abroad the Boieng 747 that normally transfers the space shuttle. The Boeing Phantom Works organization is employing rapid-prototyping techniques that facilitate the speed and agility needed to meet the 2010 flight schedule. Lab testing for the Phantom Ray air vehicle were performed last year, followed by ground testing done as St. Louis. All the Phantom Ray demonstration tests are scheduled to complete before the beginning of carrier suitability tests of a parralel Navy program – the X-47B developed by Northrop Grumman’s. Under the Phantom Ray technology demonstration program the unmanned aircraft will conduct 10 flights over a period of approximately six months, supporting missions that may include intelligence, surveillance and reconnaissance, suppression of enemy air defenses, electronic attack, hunter/killer, and autonomous aerial refueling.

Boeing has unveiled the new, fighter-sized 50 foot span experimental unmanned Phantom Ray – a test bed for advanced Unmanned Combat Aerial System (UCAS) technologies. Phantom Ray is designed to support potential missions that may include intelligence, surveillance and reconnaissance; suppression of enemy air defenses; electronic attack; strike; and autonomous aerial refueling. According to Darryl Davis, president of Boeing Phantom Works the Phantom ray is progressing on schedule and the aircraft is expected to begin taxi tests in the summer of 2010 and perform its maiden flight toward the year’s end, about two years after Boeing launched the program. Davis said the first flight in December will be followed by up to nine additional flights over approximately six months.

“Phantom Ray represents a series of significant changes we’re making within Boeing Defense, Space & Security,” said Darryl Davis, president of Phantom Works. “For the first time in a long time, we are spending our own money on designing, building and flying near-operational prototypes. We’re spending that money to leverage the decades of experience we have in unmanned systems that span the gamut from sea to space.”

Key Phantom Ray suppliers include General Electric-Aviation (propulsion and power distribution), Honeywell (brake system), Woodward-HRT (flight control actuation system), Crane Hydro-Aire (brake controls) and Heroux-Devtek (landing gear). “We’re really excited about this because Phantom Works is back as a rapid prototyping house, operation and organization,” said Craig Brown, Boeing Phantom Ray program manager. “This is the first of what I expect to be many exciting prototypes, and they’re all with exciting technology.”

“What is particularly exciting about Phantom Ray is that we will incorporate the latest technologies into the superb X-45C airframe design,” said Dave Koopersmith, vice president of Boeing Advanced Military Aircraft, a division of Phantom Works. “As we gradually expand the vehicle’s flight envelope, potential users will have access to a full range of unique capabilities that only this type of autonomous platform can provide.”

The original X-45C Unmanned Combat Aerial System (UCAS) developed by Boeing with funding from DARPA was competing with Northrop Grumman for the Joint UCAS program. Phantom Ray will pick up where the UCAS program left off in 2006 by further demonstrating Boeing’s unmanned systems development capabilities in a fighter-sized, state-of-the-art aerospace system. The Boeing UCAS program began with the X-45A, which successfully flew 64 times from 2002 to 2005. Those flights included a demonstration exercise with two X-45A aircraft that marked the first unmanned, autonomous multi vehicle flight under the control of a single pilot. Boeing also designed a larger UCAS aircraft, the X-45C, which will serve as the basis for the Phantom Ray demonstrator.

Picture above: Mark Witsken, a Boeing X-45A test pilot, simulates a test flight from a station console at Edwards Air Force Base, Calif. Witsken was the pilot on the programs graduation combat demonstration flight August 10, 2005.

Below: Boeing developed a larger unmanned combat aircraft designated X-45C, for the DARPA J-UCAS Program. All Photos on this page by Boeing 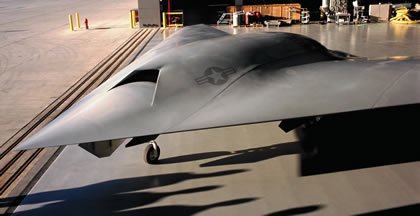 The first Unmanned Combat Air Systems (UCAS) developed by Northrop Grumman for the U.S. Navy was unveiled December 16, 2008 at the company’s manufacturing plant at Palmdale, California. The new aircraft, designated the X-47B is the first of two aircraft Northrop Grumman will produce for the Navy to demonstrate unmanned combat aircraft operations from the deck of an aircraft carrier. The Navy awarded the demonstration contract to Northrop Grumman in 2007 and aircraft assembly was completed in just over a year.

Following the roll out, the UCAS will undergo subsystem and structural testing through 2009, leading to the first flight scheduled in fall 2009. Carrier suitability tests and demonstration will be carried out during the sea trials planned to begin in late 2011.