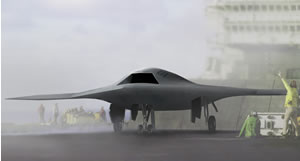 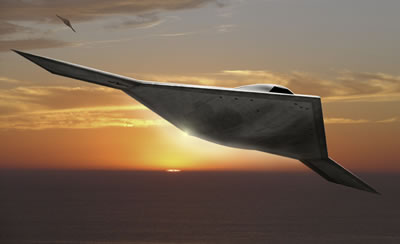 “Our goal is to find interest within the Navy supporting the Unmanned Combat Aerial System Demonstrator (UCAS) program showing the potential and convincing them in the validity of these new possibilities.” Said US Navy Ret. Admiral Tim Beard, former commander of the Naval Strike And Air Warfare Center. The new unmanned recce and strike vehicle will be the first carrier-based aircraft featuring tailless, full-aspect stealth design, contributing to its unique capability in carrying out long-range, persistent deep penetration missions over heavily defended area.

The UCAS-D program will focus on studying and demonstrating the capability of an unmanned aircraft, to fully integrate into routine operations on US Navy aircraft carriers. Northrop Grumman officials are highlighting the many benefits of a carrier-based unmanned system. Beside its inherent as cost effective pilot training, by using simulation (there is no need to actually fly the autonomous air vehicle), there are other cost savings, such as the elimination of the need for supporting combat search and rescue support for unmanned missions, and the ability to deploy a carrier with part of its air wing, augmenting it by the unmanned aircraft as the carrier group reaches its destination.

The two UCAS aircraft will begin flying operations at Edwards air force base in mid 2010 and continue testing at the at Patuxent River Naval Base, from where it will fly to join a carrier air group at sea by summer 2012. Following the demonstration the program is expected to enter full scale development, toward full potential combat readiness by 2018. 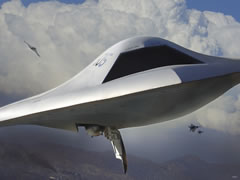 Maintaining the aircraft all-aspect low-observable characteristics, required special attention to details, uncommon in land-based aerial platforms. These included special coverage of the wing folding seams, designed in recessed tailhook and the low observable application, for the retractable refueling probe. Other features are utilizing simpler means, such as the installation of fuel links in the weapons bay, to carry two 600 gal. fuel tanks, which can be used for extended missions or mid-air refueling. With 1,200 galons of extra fuel on board, these unmanned aircraft could become popular aerial refuellers, relieving the Hornet pilot from this dull, but still highly precarious job. On combat strike missions the UCAS will be able to carry two 2000 lbs sized (JDAM) bombs or six small diameter bombs. The weapons bay will also be used to carry other payloads, including SIGINT and ELINT pods. The aircraft will be fitted with the integrated sensor suite, designed for the Joint Strike Fighter (JSF). On such ISR missions, this unmanned aircraft will be capable operating continuously for 50 – 100 hours (with multiple aerial refueling), providing the navy with unprecedented mission persistence. 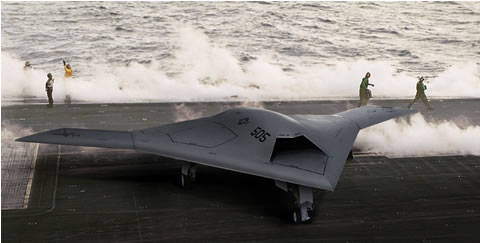 Carrier-based operations will highlight handling the aircraft, which is shorter but wider than an F-18. With a 62.1 foot wing span, the X-47B is significantly wider than an F-18 (44.7 ft) but with folded wings (27.4 ft), UCAS will occupy the same width as a Hornet, therefore enabling storage or elevator capacity of three UCAS, at the ‘footprint’ used by a pair of Hornets. With a wheel base of 16.3 ft, it will provide a stable, highly maneuverable platform, designed for efficient operation on the flight deck. The aircraft will use an air actuation system for braking, and, since no hydraulics are used on board, external power will not be necessary. On deck, the aircraft will be controlled by two operators, one watching the signals from the directors and the other, actually controlling the aircraft via Portable Maintenance Device (PMD), utilizing a wearable computer and wrist worn console. “Controlling an unmanned aircraft on board a carrier is revolutionary to the Navy, but we intend to demonstrate that it can be done without any interference to the hectic activity on board. The idea is to blend in, not to change the current procedures” says Adm. Tim Beard, “the aircraft will be able to taxi, and move just like any other naval aircraft, under or over the deck, and in the air.”

Further adapting to carrier handling, the X-47B will have a unique engine removal mechanism, enabling the maintenance crew remove the engine from the belly, by extending the carriage struts by 20 inches, gaining sufficient clearance to pull out the engine below the aircraft. The UCAS will be operated on the carrier, in the hangers, lifts and on deck, perform catapult launches, approach procedures and landing by using precision GPS (PGPS). The unmanned aircraft is believed to perform in all weather and sea conditions that might affect human operations, such as high sea, bad weather and strong winds.

Immediately following takeoff, the X-47B will be handed over to the flight operations center, where pilots supervise its autonomous flight. According to Scott Winship, fully qualified ‘pilots’ may not be necessarily for every mission, as some of the non combat related missions could be performed by flight controllers, or senior NCOs trained to perform less complex missions, which will further contribute to cost savings. The control system will be designed to enable a single operator to control several aircraft, through rapidly updated geographic and cockpit situational pictures.

The X-47B will land just as any other naval aircraft. However, the unmanned aircraft is expected to demonstrate land precision much higher compared to manned aircraft. “We expect to hit a specific cable, landing within few inches from our designated point” said Beard. Once landed, the deck operators will regain control of the aircraft, clearing the runway in 45 seconds, to maintain operational tempo.