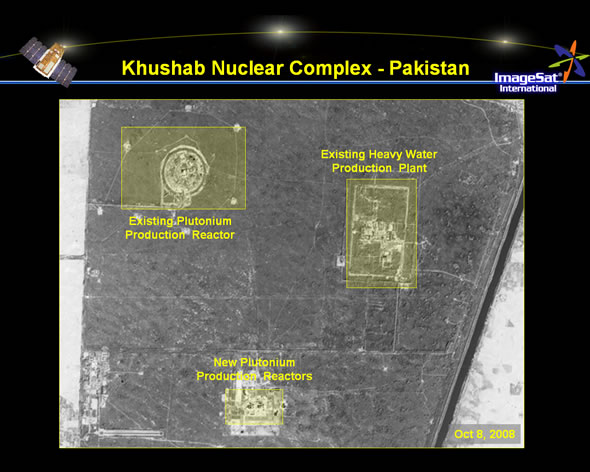 Above: Analysis of new construction at the nuclear research and production center near Khushab, Pakistan. Satellite Images: Courtesy of Imagesat International

Construction of a new plutonium producing reactor in the Pakistani nuclear research and production center is in pogress, despite the conflict with the Taliban that errupted about 250 kilometers northeast of this location.

The satellite images, obtained by Defense Update from the Israeli Eros B satellite, show significant progress in the construction site of the second plutonium producing reactor built at the Pakistani nuclear facility south of Khushab.

This 50 megawatt heavy water reactor is a central element of Pakistan’s nuclear weapons program, producing plutonium and tritium for use in the production of compact warheads for tactical nuclear weapons. The Khushab facility is not being monitored by the International Atomic Energy Agency (IAEA).

The construction of the first plutonium producing reactor in Khushab was launched in the mid 1980s with Chinese assistance It was commissioned 1996 and has ‘gone critical’ by early 1998. To fuel the reactor, a heavy water facility was constructed nearby. The site is defended by a belt of anti-aircraft weapons, clearly seen in the aerial images below. This reactor and its adjacent heavy water facility are very similar to the Iranian nuclear facility being built at Arak, which was reviewd by Defense Update in February 2009. A second reactor has been under construction since the early 2000s, and is currently nearing completion.

Images above and below: Digital Globe image, processed from Google Earth