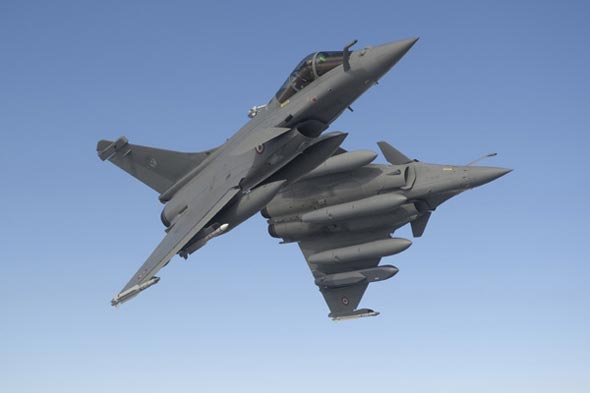 The UAE has reversed its choice of Rafale as its future fighter plane and has invited the Eurofighter Typhoon and Boeing F/A-18E/F Super Hornet and F-15SE Silent Eagle to bid on the sale of up to 60 advanced fighter jets to the UAE Air Force. For the past three years Rafale has been considered the favorite option by the UAE. “Thanks to French President Sarkozy, France could not have done more diplomatically or politically to secure the Rafale deal“ Arabian Aerospace quoted the supreme commander of the UAE armed forces and Crown Price of Abu Dhabi, Sheikh Mohammed bin Zayed al Nayhan said, “Regrettably Dassault seems unaware that all the diplomatic and political will in the world cannot overcome uncompetitive and unworkable commercial terms.” Arabian Aerospace

Rafale, with its multirole (omnirole) capabilities, was considered a fair balance to the Kingdom’s fleet of 80 Lockheed Martin F-16 Block 60, which was also fielded as a multi-role fighter, and was the first of this type to be equipped with an AESA radar. However, given the ongoing marketing campaigns in Brazil, India, South Korea and japan, where Rafale was marketed aggressively against the Typhoon, Gripen, F-16 and Super Hornet, the UAE felt the price they were requested to pay was just too high. Beside the UAE, Kuwait is also considering the Rafale.

Moreover, with ‘next generation fighters’ such as the F-35 becoming a potential viable option toward the end of the decade, the UAE may consider a transition phase, opting for buying more F-16 Block 60s, to be traded for F-35s as it becomes available. Alternatively, they could also opt for F-15SE Silent Eagle as an interim solution. At present, the U.S. government hasn’t approved offering the F-35 to the UAE, but this may change after the first planes are supplied to Israel.