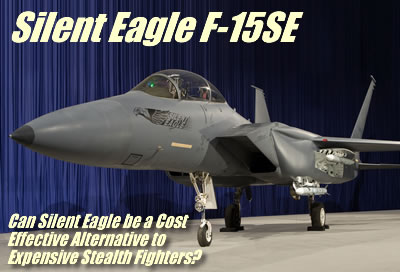 The Joint Strike Fighter is expected to suffer another, yet unexpected blow, with the Boeing Company [NYSE: BA] introduction of a new version of the F-15 dubbed ‘Silent Eagle’ (F-15SE). The new stealth configured Strike Eagle is being tailored for an undisclosed international customer, requiring enhanced stealth, and higher survivability level than those provided by current fighters. “The F-15 Silent Eagle is designed to meet our international customers’ anticipated need for cost-effective stealth technologies, as well as for large and diverse weapons payloads,” said Mark Bass, F-15 Program vice president for Boeing. Accordingly, Bass considers the new fighter a ‘balanced, affordable approach designed to meet future survivability needs.’ According to the Korea Times, the Silent Eagle will be Boeing’s bid for South Korea’s third phase F-X fighter jet acquisition program, to begin by 2012. Earlier, Seoul officials said the third phase program would focus on obtaining the so-called fifth-generation stealth fighters. The F-X aims to procure 120 high-end warplanes by 2020, and Boeing already won the previous two deals with its F-15K fighters.

A flight demonstrator of the F-15SE flew on its firs tflight on July 8, 2010. The aircraft is expected to continue through weapon release testing later in 2010.

Compared to other JSF rivals, the Silent Eagle offers significant advantages such as enhanced stealth design and internal weapons carriage, in addition to state-of-the-art flight controls, radar, and EW systems. Furthermore, unlike the F-35 the Silent Eagle is expected to be ‘open’ for customer enhancements and modifications, an obstacle that several potential JSF customers have stumbled upon in the past.

Among the improvements integrated into the new fighter are coatings and treatments applied to the aircraft skin, to reduce radar reflections and thermal loads. The specific locations and types of materials used would depend on the release policy of the US Government. Furthermore, similar to the F-22 and F-35, the aircraft uses canted vertical tails to reduce the aircraft ‘Radar Cross Section’. 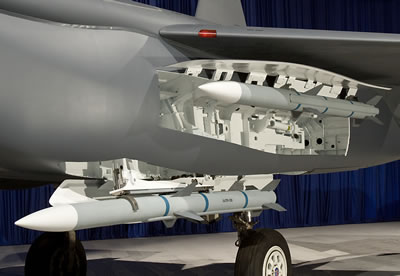 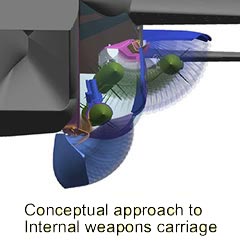 Depending on the specific mission, the aircraft can be mounted with CFTs designed for conformal or internal weapons carriage. While internal carriage improves the low-observable capability and fuel efficiency, conformal carriage increases the aircraft range and fuel capacity.

Similar to full stealth fighters, the F-15SE will have different roles and configurations in the opening phase of an air campaign and in the sustainment phase, after air superiority is achieved. Flying with full ‘RCS Reduction Package’ the F-15SE will be able to carry Air-to-Air (AIM-9 and AIM-120) missiles and air-to-ground munitions to include JDAM and SDB. The aircraft could be configured to F-15SE Multirole Capable aircraft in approximately two hours, providing long range weapon capability, employing missiles such as the SLAM-ER and Harpoon Block II missiles or any other type of weapon qualified for the Strike eagle. In this configuration the aircraft will retain a total fuel capacity of 34,700 lbs at a maximum takeoff gross weight of 81,000 lbs (carrying 29,500 lbs of payload). 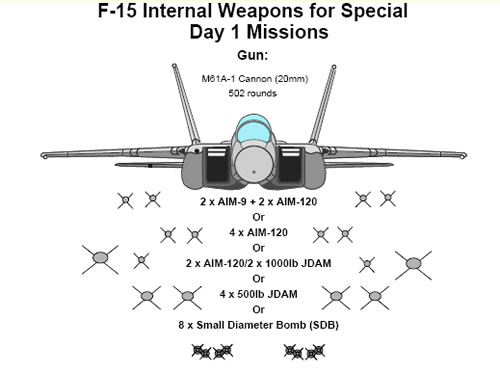 According to Boeing estimates, utilizing the twin F110-GE-129 engines the Silent Eagle will be able to reach an approximate mission radius of 800 nautical miles (nm) on air/ground missions and 720 nm on combat air patrols (CAP), employing the RCS reduction kit. Baseline CFT equipped F-15SE can reach 1000 nm on ground attack and 900 nm on CAP. The Silent Eagle will be able to internally carry air-to-air missiles such as the AIM-9 and AIM-120 and air-to-ground weapons such as the Joint Direct Attack Munition (JDAM) and Small Diameter Bomb (SDB). The standard, external weapons load used on current versions of the F-15 is available with the traditional CFTs installed.

Survivability improvements include a Digital Electronic Warfare System (DEWS) from BAE Systems designed specifically to work in full interoperability with wideband RF systems including the Raytheon Advanced Electronic Scanning Array (AESA) radar. The aircraft will be fitted with a network-enabled integrated sensor system, comprising a targeting pod, infrared search track (IRST) system, navigation pod, the AESA radar and threat warning ECM. Voice over data communications, employing datalink connectivity will enable the Silent Eagle to rely not only on on-board data, but share and receive sensor data and target location from external sources, assisting in the creation of full and updated situational awareness even in ‘silent’ modes of operation.

Boeing has completed a conceptual prototype of the CFT internal-carriage concept, and plans to flight-test a prototype by the first quarter of 2010, including a live missile launch. The design, development, and test of this internal carriage system are available as a collaborative project with a yet unnamed international aerospace partner. Brad G. Jones, program manager of Boeing’s F-15 Future Programs, said in video briefing from St. Louis for Korean journalists that his firm was ready to offer the F-15SE for Seoul’s next phase F-X deal.