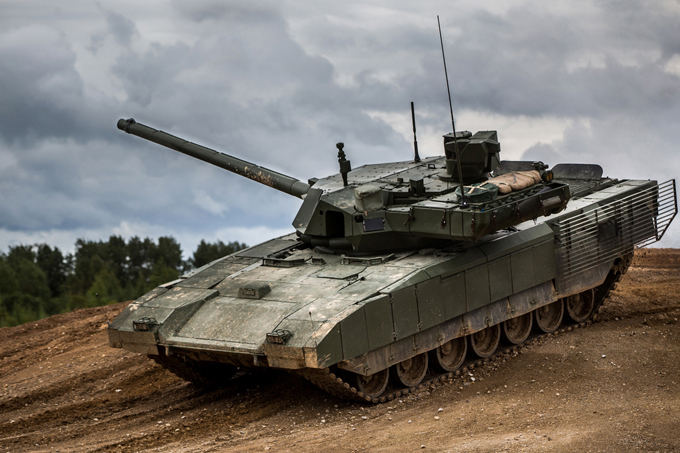 Since WWII, the traditional Russian warfare theory was based on quantity as the dominant component for battlefield dominance. To obtain the quantitative edge, the Russian designed their combat vehicles to be as small as possible. Smaller tanks with lower silhouette were small targets and were also cheaper to make. This meant cramped fighting compartments that could be manned by fewer crew members of minimal height. Due to their low cost, these AFVs could be mass production. Combat vehicles were designed to be robust and simple to use but were also complex to repair in the field and harder to return to combat conditions.

The new AFV families unveiled in 2015 based on the Universal Combat Platform reflected a new perception, centered on a preference for improved survivability and agility, relying on heavier and more advanced armor. The integration of state-of-the-art electronics and advanced human-machine integration enabled improved ergonomic design in those modern vehicles. According to Russian sources, the new generation of AFVs is designed for higher reliability, enabling combat formations to fight for an extended time with minimal breakdown.

The T-14 is about 25 percent longer than the traditional T-family tanks and is slightly larger in width and height. Notable innovations in the new tank include an unmanned turret with an advanced 125 mm cannon – a world-first application of this caliber’s unmanned turret. The turret accommodates an automatic loader suitable for traditional rounds and the more advanced and powerful 125 mm rounds (SVINETS) slightly longer than the regular rounds.

Adhering to the classic protection layered ‘onion,’ the ARMATA has three layers of physical protection – the outer layer comprises a soft and hard-kill active protection suit called AFGANIT. The AFGANIT of the T-14 includes a collection of four detectors: an active electronically scanned radar, a passive threat detector operating in the UV/IR bands, a laser threat detector, and video cameras. Two types of countermeasures are associated with this sensor array. A soft defense implements four banks of aerosol armaments, each containing 12 armaments, creating effects of disruption and deception dealing with incoming guided threats. The aerosols mask the tank in the visible, laser, and IR but are not effective against radar. Two of the aerosol armament banks are directional, mounted on the traversable pedestals on turret sides, while the other two are pointing upward to deal with a top attack.

If the soft-kill methods fail to defeat an incoming threat, the hard-kill APS employs rocket interceptors, launched from 10 barrels surrounding the tank below the turret line, covering the forward arc. These countermeasures are designed to defeat incoming rounds at a safe distance from the tank.

If the hard-kill has failed to stop the incoming projectile, another layer of armor comes into effect – the Class IV reactive armor (known as MALAKHIT). Reactive armor contains a metal plate activated against the incoming projectile, triggered by impact sensors activating a small explosive charge that diverts and dissipates the threat. This armor is combined with passive armor made of steel and ceramic armor, comprising the innermost protection layer, protecting against the effects of kinetic or chemical threats.

The most protected area would be the crew compartment located at the chassis center, isolated from the ammunition and other combustible substances inside the tank. This compartment improves crew survival if the armor is compromised.

Three crew members operate the tank, but two crew members can also operate the current configuration. In the future, the Russians explore the possibility to remove the crew from the tank and operate ARMATA it as a robotic tank.

Information about the industrialization and production of ARMATA is sketchy. Open sources in Russia (if there are such) refer to several dozen produced, mainly prototypes, pre-production series produced for state field experiments, training of operating units and maintenance teams, and display in exhibitions and parades.

Assuming that the manufacturer – UralVagonZavod (UVZ), has overcome all the problems and provides a solution to the operational requirements, there is still the tank unit price issue. As the most sophisticated combat vehicle of Russian production, ARMATA has a high price threshold, by Russian standards. Originally, the initial price for a single tank was around R650 million ($8 million) and, after lengthy negotiations with the defense ministry, was cut by half to around $3.2 million.

Since the introduction of ARMATA, the Russians consider and have tested the possibility of replacing the main gun with a 152 mm cannon that will allow the defeat of advanced armor, launch missiles to a range of 12 km, and be able to fire nuclear ammunition. Other future improvements could include a gas turbine engine developing 3000 hp of power, electrothermal active protection components, and transparent protection componentsץ

In conclusion, assuming ARMATA is fielded with all the advanced components that characterize the new and revolutionary design, the Russian front line armored formations will obtain significant firepower, accuracy, survivability, and mobility over peer forces. Moreover, some of those developments and capabilities will be applied to other battle tanks and APC of the earlier generations.

As of late 2019, the Russian Ministry of Defense received 12 T-14 tanks and four T-16 BREM / ARV combat support and recovery vehicles sharing the same ARMATA chassis. Some of the tanks were reportedly deployed for field trials in Syria. Assuming serial production begins in the second half of 2021, UVZ expects production rates of 200-120 vessels per year unless the Russians have reason to increase production capacity significantly. In December 2020, Sergei Chemezov, Rostec CEO, confirmed that the first tanks coming from the serial production line would be delivered to the Army in 2021. Also, Armata has been cleared for export.

There are also indications on other, yet unconfirmed variants based on the Armata platform, including the T-17 Tank Destroyer, mounting the 9P157 Chrysanthem-S missile system currently used with BMP-3 infantry fighting vehicle chassis.

The ambitious plan forecasted the induction of 2,300 ARMATA-class main battle tanks by 2025, but by the end of 2020, the fielding of ARMATA still lags. Although industrialization and Operational Tests (OT) have moved forward recently, ramping up such complex systems still lingers behind. Since the 2018 contract for the delivery of 132, around 20 pre-series production vehicles have been delivered so far. Some of the causes could be the dependence on foreign suppliers for some components may have slow-down in production ramp-up. It may have affected by sanctions. These are possible and are why the Russian defense industry’s difficulties in meeting performance targets, technology implementation, delivery dates, and platform costs. Meanwhile, Russian Defense Minister Krivoruchko stated that “In order to shorten the timeframe for deliveries, production will begin before the completion of all trials, as soon as the tanks meet the specified characteristics and following operational testing under simulated combat conditions.”