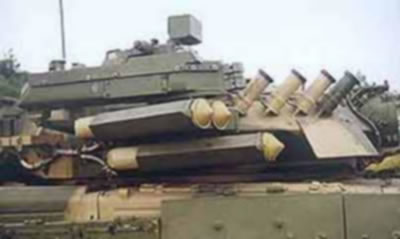 The first and probably the world’s only operationally deployed APS developed by the Russian KBP company was the 1030M Drozd (Thrush), which was first installed on a T- 55AD MBT in 1983s. The automatic system is capable of defeating anti-tank guided missiles and grenades, approaching at speeds between 70 to 700 meters per second. The system employed eight 107mm anti-missile rockets, triggered by a pair of millimeter-wave radar sensors mounted on either side of the turret facing forwards. This configuration utilized the turret traverse to slew the protective devices into position. The rockets use time delay fuzing to activate a fragmentation charge at a safe distance from the tank.

It is assumed that each radar sensor and rocket quad covers 40 degrees of the frontal arc. with an elevation of -6 +20 degrees. The rockets can be fired at any direction the turret points at, and rely on the the radar for early warning, target detection and intercept parameters (speed and direction). The original Drozd two quad-round launchers, utilizing four High Explosive Fragmentation charges, weighing 19kg each. The total system’s weight is below 1,000kg. To provide 120 degrees coverage, Drozd-2 system was proposed, with five twin-rocket launch tubes and sensors mounted on different locations. The system is currently offered for the upgraded version of the T-80U. It is also proposed for the “Black Eagle” project.