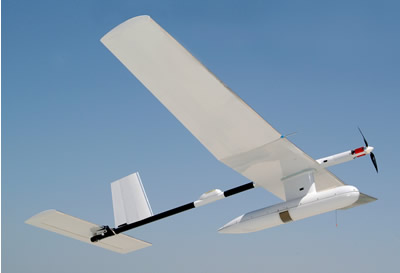 The mini UAV is quickly assembled before the mission and is launched by hand. Recovery is performed by a deep stall maneuver, which lands the vehicle safely on a small inflatable cushion, at a pre-designated point. the cushion is designed to protect the payload on landing. The entire mission is flown autonomously, feeding real-time continuous video and telemetry data to the portable ruggedized ground station. Its wings and tail surfaces are constructed of a lightweight composites, the fuselage tubular boom is also made of composites. The avionics and payload systems are contained in a pod carried below the boom. The gimbaled payload utilizes a daylight CCD or an optional FLIR for night operation, which can be rotated by four gimbals. In February 2004 Elbit won an IDF Ground Forces Command contract to supply the Skylark for evaluation and testing as an organic UAV system, to be operated by infantry units.