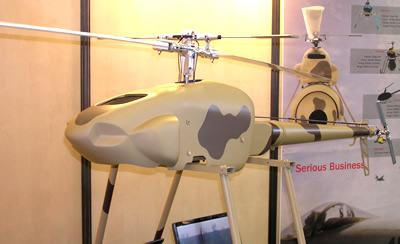 TAG has developed several types of autonomous unmanned rotorcrafts, optimized for tactical reconnaissance and surveillance missions. M65 is a miniature rotorcraft currently under production for unspecified users in the US Armed Forces. The UAV is designed to carry standardized payloads attached to the belly payload bay. Ground clearance is provided by extended landing racks. TAG developed a 36×45 cm ball shaped payload, weighing 1.5 kg which can carry cameras and other equipment, with a total weight of 4.5kg. The vehicle is powered by a 63.8cc two-stroke piston engine which can lift the vehicle to 4,000 m’ at a gross takeoff weight (GTW) of 11.8kg. Cruising speed can be maintained at 100km/h, with mission endurance of five hours. A larger version, M80 is powered by a 76.8cc engine, has a GTW of 14.4 kg and mission endurance of 8 hours. M2600 is a larger unmanned rotorcraft developed by the company, currently in a prototype phase. At a gross takeoff weight of 654kg M2600 will be able to carry 250kg payload. It will be equipped with a 2600cc engine powering an 8 meter rotor, which will develop Cruise speed of 165km/h and operating ceiling of 3,200m.