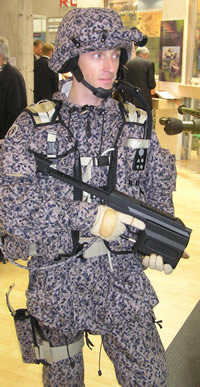 Infantry warfare went through significant changes in recent years, transforming from heavy mechanized forces, designed to fight post WW-II and cold war operations, to light expeditionary forces which were considered suitable for peacekeeping and rapid intervention operations. However, combat experience in the war against terror further reshaped military thinking. These new conflicts are characterized by operations in urban environment, with regular forces confronted by opponents using guerilla tactics. Guerilla forces try to degrade the technological and firepower superiority of regular armies, denying the use of tanks, APCs, artillery and airpower, while troops are forced to dismount and dragged into “one on one confrontation” in dense urban combat.

By improving the capabilities of dismounted infantry and expanding the use of precision weaponry, modern armies are maintaining their technological superiority and are able to fight and win without risking too many casualties among their own troops and non combatants. To maintain this capability armies are beginning to operate “human-centric” weapon systems, balancing soldier’s performance and capabilities in firepower, survivability, mobility, command and control addressing them as a complete and integrated ensemble. Some of these capabilities are available today and used worldwide in combat operations worldwide. Particularly advanced infantry combat suits, are currently under development and should be fielded within the next five years.