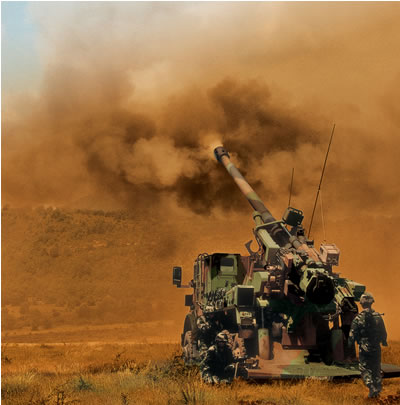 In recent years, fire support innovations are not provided by new platforms, or more powerful cannons, but by the integration of advanced systems, which maintain the artillery’s position as one of the most dominant effectors of the modern battlefield. Some of the modern trends could be seen at Eurosatory 2004, including mobilization and automation, which contribute to more flexible and survivable operation; long range and precision improvements, and moving toward net centricity. Among the systems shown were the Caesar autonomous truck mounted gun system which was also demons strated in the field.

Caesar will soon entering production for the French army. As a model of the Romanian ATROM was also on display. Among the self propelled mortars, Thales’ D2DR demonstrated its dramatic rapid performance in the field. This mortar is also entering Frenc Army service. A self-propelled dual barrel AMOS mortar was also displayed by Patria’s AMOS, as configured for the Finnish Army, while CARDOM was shown by Soltam – this mortar is being produced for the US Army. Smart munitions for 120mm mortars were also on display – a new arrival was the PGMM shown by ATK for the first time.

IAI displayed its new Fireball laser guided bomb and IMI unveiled its own version for a 120mm laser guided bomb. Among the artillery smart ammunitions, several versions of cargo shells were shown including 155mm versions of Excalibur, IMPAQT, Volcano and GAA, but their payloads is narrowing down into two choices – SMART and BONUS. Conventional ammunition stocks can also be upgraded, with the introduction of Course Correction Techniques, demonstrated by GIAT’s Spadico, Diehl and IMI.