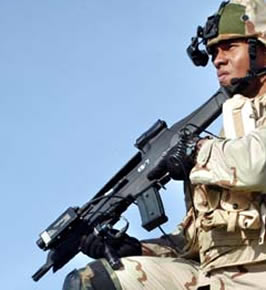 The XM8 lightweight Modular Weapon System is based on the Heckler & Koch G36. In its current version, it is derived from the XM29 OICW program. The weapon fires 5.56mm ammunition and its planned weight will be only 5.7 pounds, considerably less than current carbines. The weapon is under development since October 2002 and is expected to be ready for fielding by 2005. The new weapon will provide lethality performance comparable to the currently fielded M4 carbine rifle, at considerably lower weight. The XM8 is designed as a modular weapon, which can be fitted with different barrels and other modules which can be swapped quickly to meet changing mission requirements. The basic version uses an integrated sight with infrared laser and illuminator, red dot reflex sight and integrated mount. Variants include the baseline carbine, a sub-machine gun-like personal defense weapon, a sharpshooter’s configuration and a variant for use as a heavy-duty machine gun for sustained rapid-fire applications. An optional add-on 40mm grenade launcher is also available. A comparable M4 configuration weighs 8.85 pounds. The sight is powered by battery and is controlled by a wireless switch which can be mounted anywhere on the weapon. The weapon also has an integral accessories attachment rail which can also mount standard 1913 adapters to carry accessories which are not integrated on the weapon.

The XM8 Light Weight Modular Weapon System has been proposed as a replacement for the current M16 rifle and M4 carbine, the standard infantry weapons in today’s U.S. military. In anticipation of such future contracts, General Dynamics European Land Combat Systems, (a business unit of General Dynamics) and Heckler & Koch GmbH of Oberndorf, Germany, have announced on January 3rd 2005 the creation of a U.S.-based joint venture company to manufacture and deliver the 5.56mm XM8 Light Weight Modular Carbine System to U.S. government customers.

However, after temporarily suspending the RFP for a new family of weapons for which XM8 was considered a strong candidate, on October 31, 2005, the program has formally suspended, “pending further US Army reevaluations of its priorities for small caliber weapons, and to incorporate emerging requirements identified during Operation Enduring Freedom and Operation Iraqi Freedom. The Government will also incorporate studies looking into current capability gaps during said reevaluation.”