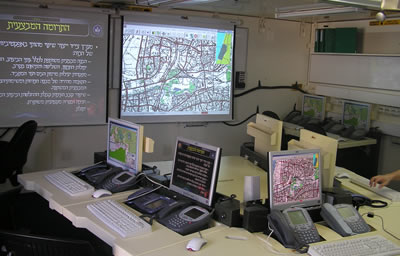 The Israel Defense Forces (IDF) “Ground Forces Digitalization” Program (Hebrew acronym ZAYAD) aims at linking the “sensors” and “shooters” across all command levels, down to the single soldier. The program will improve inter-networking of task forces and units operating throughout the theater of operation, enable flexible formation of combined task forces and improve the coordination and situational awareness at all levels of operations. The program will integrate to existing systems, including the strategic command, and battle management systems, currently available below the brigade level. The program will also integrate with the IDF future infantry combat system, currently under development at Elbit.

ZAYAD at the Division Level
At the division level, the program will implement dramatic changes, with the introduction of shelter-based computerized tactical operations centers, which will enable commanders to effectively monitor the situation in real time. These centers are fully equipped with all communications, processing, display, power distribution, and wiring required for operations. For voice communications digital communications will utilize Voice over IP technology, for maximum flexibility and optimal use of the spectrum. This technology offers automatic routing of calls to the most efficient channel and prioritization of high priority calls to maintain reliable links at the most critical phases of combat. Below the division level, high capacity data radios are expected to provide support for digital communications, both for stationary and on-the-move applications. Multiple Line-Of-Sight communication systems, currently supporting the division’s communications channels to higher echelons and subordinate units, are also expected to be replaced by broadband satellite terminal, to facilitate seamless connectivity over a wide geographic area. Terrestrial LOS systems will continue to provide broadband data networking at much larger capacities (up to 155 MBps) using new mobile SDH communications terminals.

Computerized TOC
The computerized TOC is designed for rapid setup and could be fully operational within 30 minutes of deployment. Other assets are used for command on the move. The system will also enhance the IDF capability to create flexible, task oriented forces. It is based on advanced hardware and software C4I technologies. The Program will enable coordination between forces at different command levels, provide situational awareness to maneuvering forces, improve the overall operational capabilities, including survivability and accuracy, while efficiently utilizing manpower and other resources.

Tactical Internet Implementation
An important requirement of the new network is the capability every authorized user to transmit, receive and view high resolution still format, as well as live video from any sensors (including ground observations, BMS sight views, UAVs etc). This capability requires an optimized distribution of data, and the economical utilization of available spectrum. One of the solutions considered for this requirement is the implementation of the Tactical Internet Geographic Dissemination concept (TIGER) developed by Elbit Systems. Subscribers to the TIGER system automatically receive, store and distribute information, based on various parameters, including their geographical location and hierarchical placement in the command system. TIGER automatically update the communications channels and C2 systems of units when they are moving into a new area, or as ad-hoc task force are formed. Furthermore, the redundancy and survivability of the system are improved, as every subscriber is also a node, there is no “single point of failure”, and the entire system can continue to function even under degraded conditions (countermeasures, interference or attack).

Under the Program, the existing ground forces Command, Control and Communications systems of the ground forces will be integrated, combining systems and applications developed and matured by Elbit Systems, the prime contractor as well as other subcontractors, including Tadiran Systems and Rafael. The Program includes development, supply and support of software and hardware, such as command and control consoles and terminals as well as information and image processing and dissemination systems. The cost of the multi-year program is estimated at over $200 million. Additional funding is expected to be added in US Foreign Military Sales, for the procurement of hardware systems for the program. Elbit received the contract on December 2004 and is expected to deliver the full system within ten years.