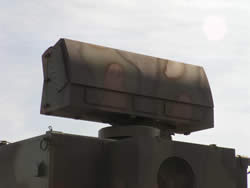 Orlikon Contraves unveiled the X-Tar 3D radar, which completed development recently. The new radar is proposed as a primary sensor for German and Canadian tactical air defense systems. Following the testing phase scheduled for 2006, the radar will be ready for production by early 2007.

The new radar is optimized for the detection and automatic tracking of highly maneuvering air and surface targets, and can operate in dense ECM environment. The radar is available in Short, Medium and Long range configurations. When integrated into a VSHORAD command post, X-Tar 3D-S and M versions provide 25 – 30 km detection ranges and are optimized as a primary sensor for guns and MANPADS effectors. The X-Tar 3D-L version is optimized for the SHORAD mission, covering a range of 45km. X-Tar 3D is expected to be included in the German SysFla project (below) and the Canadian MMEV program.