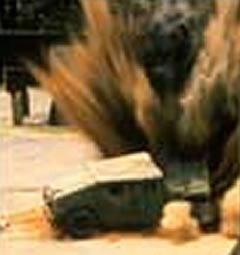 During the conflict in Kosovo and more recently in Afghanistan and Iraq, it became clear that soft, unprotected vehicles became primary targets for guerilla attacks. These vehicles are highly vulnerable to any type of attack – mines, Improvised Explosive Devices (IED), firebombs, grenades, small arms or mortar fire and especially RPG. While US and French forces confronted highly determined guerilla forces in Algeria and Indo-China (Vietnam), lack of recent experience left most of the western armies and peacekeeping forces unprotected against such highly lethal threats. The painful experience NATO forces encountered from mines in Bosnia identified the need to equip the patrol, command and supply vehicles with effective counter-mine capability. The results were evolutionary developments of the M1114 up-armored Humvees, and the protected patrol vehicle (PVP), which was later transformed into the Dingo (German Army) and the MLV/LMV (British and Italian forces). These vehicles are offering better protection, and were considered to be used to lead and protect convoys and as patrol vehicles. Adequate to lead and provide convoy security and acting as light combat patrol vehicles.