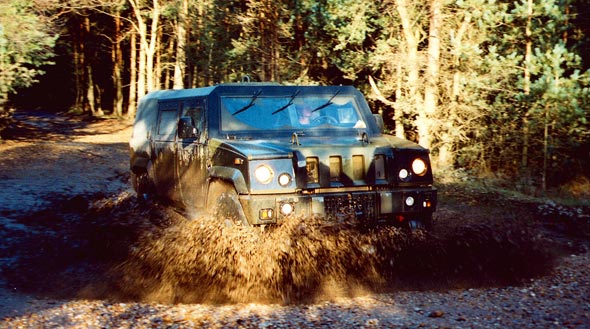 The Multirole Light Vehicle (MLV) is a new family of light armored 4×4 vehicles available in soft-skinned or armored versions. It is based on the Iveco LMV vehicle, of which 2,500 are in production for the Italian Army. The UK version accommodates up to four fully equipped troops, while the Italian version can take five. A stretched version will be able to carry seven troops under armor. Belgium also selected the LMV for its Light Armored tactical Vehicle (LATV) 440 vehicle program.

The MLV has a gross weight of 6,500kg (STANAG level 3 protection) and a payload in excess of 1,200 kg. It uses a 3,000cc Iveco 186 Bhp diesel engine and fully automatic 6 speed gearbox. Some of the vehicles are expected to be armed with the Enforcer remote controlled weapon systems. The FCLV’s system of choice was based on RAFAEL’s RCWS design and is armed with 5.56/7.62/12.7mm Machine Guns / 40mm Automatic Grenade Launcher, to be provided by AEI.

The MLV Protection system meets various levels, from STANAG level 1 to STANAG level 4, which was required by the Italian Army. The Italian MLVs use the latest version AMAP composite armor, protection while the British version uses lower level of protection. The armoring system uses appliqué armor panels, placed between the inner and outer hull. This concept provides for protection upgrade capability, to meet changing mission requirements, as well as introduction of new, lightweight materials as they become available. The crew is also protected from mines of up to 6kg under the wheels. The MLV can be fitted with a mission configured overhead weapon station, equipped with day and night vision.

The British Army has ordered 486 MLVs designated “Panther” for its Command and Liaison Vehicle program (CLV). In this role, MLVs will be used for a wide range of battlefield missions, with variants for infantry, artillery, armor, engineer and signals users, and will replace the ageing vehicles such as Saxon, Spartan, FV-430 and unarmored Land-Rovers. By 2005 Alvis is expected to introduce specific MLV based prototypes for each of the mission configurations, while production of the vehicles is expected between 2006 and 2009. According to the 140 million pound procurement contract, the British MOD has options to buy 400 additional vehicles. The program’s cost will also be enhanced by support services to be provided over the life of the vehicle.

The Panther is equipped with a remotely controlled Defender 7.62mm Self-Defense Weapon Station (SDW) equipped with 7.62 machine gun and a day/night sight. The vehicle on display was configured as a command vehicle, equipped with multiple Bowman radios, and situational display for the commander. Other displays are serving the driver’s station and weapon station’s operator. First production Panthers are due for delivery in mid-2006, in time for the vehicle’s entry to service in 2007. Up to 15 variants of the Panther are expected to be used by the British Army, and Royal Air Force Regiment.

In May 2009 the MoD announced the first batch of Panther Command and Liaison Vehicles has been delivered to British troops in Afghanistan. The vehicles will be first used by both the RAF Regiment and the Army’s Close Support Logistics Regiment. More vehicles are en route to theatre later this month for deployment on the front line. 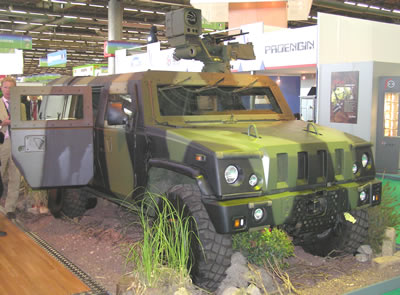