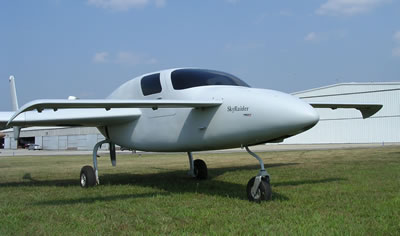 SkyRaider is an advanced, optionally piloted vehicle (OPV), which is capable of both manned and unmanned operations to fulfill a wide range of missions. The a 4,000 pound gross weight aircraft has a wing span of 32’ and is equipped to carry a variety of sensors and external stores. The aircraft is capable of mission duration of 20 – 30 hours. For example, when configured to carry an internal payload of 1,000 pounds it can sustain a 20 hour missions. The aircraft can also carry and release external stores weighing 160 pounds on each wing. SkyRaider operates at a ceiling of 24,000 feet and at cruising speed of 175 kTAS. Loiter speed is 120 KTAS. The basic platform uses an FAA certified 260 horsepower AVGAS aircraft engine. Proxy also offers a heavy fuel propulsion option for lower fuel consumption and increased endurance.

A variety of quick change payloads enable the operators to quickly task the aircraft for specific missions. The platform is capable of carrying heavy payloads to support variable mission requirements including Synthetic Aperture Radar (SAR), Electro Optic (EO) / InfraRed (IR) imaging, Signal Intelligence (Sigint), Communications Intelligence (Commint), Communications Relay and others. When operated on an autonomous mission, SkyRaider is preloaded with a flight plan which can include tactical objectives for autonomous missions. As an OPV, SkyRaider has a unique capability to rapidly deploy across civil airspace.