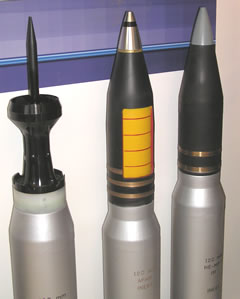 KEW-A1 (General Dynamics / Rheinmetal)
The 120mm KEW-A1 cartridge is a tungsten based Armor-Piercing, Fin-Stabilized Discarding Sabot-Tracer (APFSDS-T). This projectile provides a high performance alternative for depleted uranium based projectiles. The 19.6kg ammunition uses 8.4kg of propellant and a combustible case, packing the 4kg penetrator and aluminum sabbot, fired at a muzzle velocity of 1740 m/sec generating chamber pressre of 5,800 bar.

KEW-A2 (General Dynamics)
The 120mm KEW-A2 cartridge is uses a tungsten penetrator, and is proposed as an alternative for depleted uranium based KE projectiles. KEW-A2 uses 8.6kg of JA-2 propellant, accelerating the 7.6kg projectile to a muzzle velocity of 1,700 m/sec. The projectile uses the tungsten rod, steel fin and sabot fabricated from composite materials. ot, fired at a muzzle velocity of 1,740 m/sec generating chamber pressre of 5,800 bar.

The M829A3 is proposed for the next generation KE tank cartridge. It completed type classification standard in March 2003 and is currently in full rate production for the US Army. The M829A3 cartridge has a total weight of 22.3 kg and length of 892mm. It uses 8.1 kg of RPD-380 stick propellant, accelerating a 10kg projectile to a muzzle velocity of 1,555m/sec. The penetrator uses depleted uranium; the sabot is built of composite materials.

DM53 120mm KE Projectile (Rheinmetall)
The DM53 round was designed to maximize the performance of KE projectiles fired from 120mm smoothbore guns such as the L44 (15% improvement) or L55 (30% improvement in muzzle energy). The DM53 is in service with the German, Swiss and Netherlands Armies. The complete round weighs 21.4kg, the projectile (with sabot) weighs 8.35kg and propellant: 8.9kg. The projectile’s length is 745mm, and with chamner pressure of 5,450 generated during firing, the muzzle velocity is 1,750 m/sec (L55 barrel) and 1,670 m/sec. (L44 barrel). The DM53 has been optimized to lass than 0.2 mil accuracy.

The DM63 round is based on the DM53, with modified propulsion-based Temperature Independent Propulsion System (TIPS) utilizing the SCDB technology. The new type uses 8.45 kg of pure bulk powder to achieve nearly the same muzzle velocity of the DM53 (1,650 m./sec on L44 barrel). The propellant modifications aimed at improving the accuracy through a wide operational temperatures (-46 +63C) ensuring safe operation extreme climate zones, and minimizing the erosion of the barrel.

IMI introduced a similar round designated M-338, which improves the KE performance of its 120mm KE rounds, and is suitable for all types of guns (including L44). M-338 uses a tungsten core designed for improved penetration and performance.Using new Low Vulnerability (LOVA) propellant enabled IMI to increase the M-338’s muzzle velocity with large safety margin while maintaining precision and operability over the entire temperature range defined by STANAG criteria. IMI used a uniquely designed tungsten alloy core, with unique mechanical properties and sabot design to improve accuracy at all combat ranges.