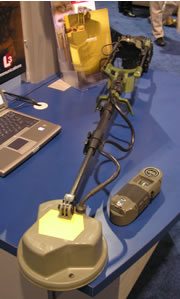 CyTerra, a L-3 Communications (NYSE: LLL) subsidiary received a U.S. Army follow-on order worth about US$40 million to provide several thousand AN/PSS-14 advanced mine detection systems. The purchase is the second order placed by the U.S. Army under a ten year, full rate production contract for up to 17,000 units with an anticipated value in excess of $300 million. To date, L-3 CyTerra has delivered more than 3,000 AN/PSS-14 mine detecting sets to the U.S. Army and U.S. Marine Corps under this and other contracts. The initial order, announced in August 2006, was for more than $24 million of systems.

AN/PSS-14 was developed under the U.S. Army Handheld Standoff Mine Detection System (HSTAMIDS) program. Unlike earlier generations of mine detectors, that relied on metal detection alone, the new device combines highly sensitive metal detection with ground-penetrating radar and advanced data fusion algorithms, all in a rugged, compact system. This unique combination of technologies represents a major advancement in detection capabilities and enables the AN/PSS-14 to accurately differentiate deadly landmines from harmless metal debris. The AN/PSS-14 significantly improves the speed and safety of mine clearance operations, and dramatically enhances the ability to readily locate both metallic and low-metallic anti-personnel and anti-tank mines buried in all types of soil and terrain.