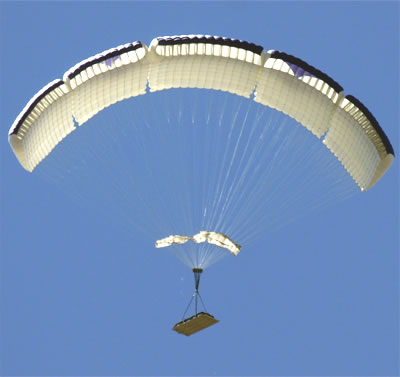 In recent years, GPS-guided ram-air parachutes render more flexibility to load drops. Since 2004, the US Marine Corps have been using Sherpa TM/MC GPS guided parachutes in Iraq, dropping 1 ton loads within 70 meters from their designated target point. In August 2006 the first ‘Screamers’ were tested In Afghanistan, dropping container delivery system bundles, containing food, water, ammunition and other supplies, weighing 500 to 2,200 lbs (0.2 to 1 ton.), to troops on the ground.

Precision Airdrop for Special Operations has been chosen among the ten highest priority areas defined for NATO’s Defense Against Terrorism (DAT) effort. The purpose of the DAT program is to develop new, cutting-edge technology to protect troops and civilians against terrorist attacks. Precision airdrop capabilities will enhance the capability of NATO forces to deliver personnel or equipment stealthily and precisely under all-weather conditions wherever they may be needed. This capability will also support the increasing deployment of NATO troops to long-distance out-of-area contingency operations, which have lately become in vogue. 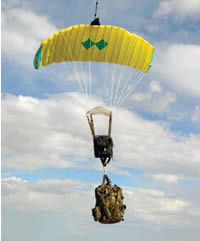 High altitude, precision airdrop is expected to be key enabling technology for future forces deployment. Such capabilities will facilitate rapid strategic and tactical deployment of forces, supported ‘just-in-time’ with supplies delivered precisely to any location throughout the world. The increased accuracy and ability to drop to more than one location simultaneously means that soldiers on the ground can recover the cargo quickly and know exactly where it will land. Such capability is providing military planners with the capability of strategically and covertly positioning equipment and supplies for rapidly moving ground and special operations forces.

Aimed at supporting ground troops with essential supplies, the U.S. Army Natick Soldier Center has teamed with the U.S. Air Force Air Mobility Command to develop new air-drop capabilities, first pushing immediately essential supplies such as ammunition, water, fuel and medical supplies to forward deployed troops. The medium and heavy systems will be fielded at a later phase and will enable precision air drop of loads ranging from 20,000 to 60,000 lbs (9 – 27 tons) of cargo, more than enough to deliver the Army’s eight-wheel 19 ton Stryker combat vehicle. As the Army transforms to the Future Combat System, JPADS will provide the ‘just-in-time’ logistics needed. The ultimate goal intention is to resupply troops anywhere in the world within 24 hours with supplies directly flown from the United States bases. JPADS will satisfy four ‘gaps’ identified in the current air-drop capability: increased ground accuracy, standoff delivery, increased air carrier survivability, and improved effectiveness of airdrop mission operations.

Known as Joint Precision Air Drop System (JPADS), the program is pursuing cargo systems in weight classes, including the “Extra Light” (JPADS XL, 700 – 2,200 lbs / 0.3 – 1 ton) and “Light” (JPADS L 5,000 – 10,000 lbs / 2.2 – 4.5 ton) classes, slated for fielding within the near term (around 2008). All systems will be required to hit a pre-planned GPS ground target within 50 meters, cleared for high altitude drop from 24,500 feet mean sea level, and capable of being deployed from at least eight kilometers horizontal offset from the ground target. Using a portable mission-planning tool and wireless communications loadmasters will be able to update the mission plans uploaded to the rigged JPADS before the flight with last minute changes of drop-zone location, threats etc.