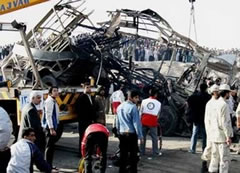 Two bombings in mid February near Zahedan in southeastern Iran are the latest in a series of high profile incidents involving armed opposition groups based among the country’s ethnic minorities. The most recent attacks again raise questions about the activities of Iranian clandestine groups, seeking a regime change, with, or without US assistance. Zahedan is the capital of Sistan-Baluchistan province, which borders Pakistan and Afghanistan and is home to Iran’s estimated 1-2 million ethnic Sunni Baluchis. The first blast killed at least 11 members of Iran’s Islamic Revolutionary Guards Corps (IRGC) who were travelling in a bus from their housing compound to a nearby military base. A further bombing, followed by sustained clashes between police and an armed group, named Jundallah, a Sunni extremist organisation based among Iran’s Baluch minority. Sistan va Baluchistan straddles the main drug-trafficking route from Afghanistan and Pakistan to Europe and is among the poorest and the most lawless provinces in the country. Many locals resort to drug trafficking and smuggling in order to survive.

The Provincial police commander Brigadier General Mohammad Ghafari said a total of 65 suspects had been detained over the Zahedan attack, including three who were believed to have actually carried it out. He renewed Iranian accusations that Jundullah was receiving support from British and US forces in neighboring Afghanistan for its campaign of violence in Sistan-Baluchestan. A man identified as Nasrollah Shanbe Zehi was executed at the site of the attack in Zahedan, after having confessed on Iranian state TV to be involved in the bomb attack.

The Sunni militant group Jundullah (army of god), operating in Baluchistan seems to be an offshoot of a terrorist network based in Pakistan and is allegedly fighting to establish a unified, independent Baluchistan. Formed in 2003 it is led by Abdul Malik Rigi, who in his mid-twenties, goes by the title ‘Emir Abdul Malik Baluch. In March 2006 members of the group dressed in police uniforms attacked the motorcade of the governor of Zahedan, killing 22 members of his entourage on the spot and abducting 12 more. The governor himself was badly wounded but survived.

While no definite proof has surfaced over any direct, or indirect involvement of American intelligence agencies in the latest bombing in Zahedan, the US should certainly be interested inflaming ethnic and political opposition inside Iran.

Analiysts estimate that sectors of the Baluch elite who, like their counterparts among Iran’s Azeri, Kurdish, Arab and other minorities, are considered having potential benefits of aligning themselves with Washington in a future military conflict with Iran. US support for such layers could create an even greater catastrophe than in neighbouring Iraq, where the American-led invasion has triggered an escalating sectarian civil war.

In fact by his own undoing, President Mahmoud Ahmadinejad is building up the growing ethnic opposition camp against the centralist cleric Shiite rule in Tehran. According to James Woolsey, former director of CIA, a bare majority of Persians rule restive minorities of Arabs, Azeris, Kurds, Baluch, and others. Just as is needed to exploit the resistance to the regime among the younger people, reformers, and women, Washington should also need to pay attention to its geographic and ethnic fissures – for example, a large share of Iran’s oil is located in the restive Arab-populated regions in Iran’s south.

Although Iran’s state religion is Shiite Islam and the majority of its population is ethnically Persian, millions of minorities from various ethnic, religious, and linguistic backgrounds also reside in Iran. Among these groups are ethnic Kurds, Baluchis, and Azeris. Many of them face discrimination and live in underdeveloped regions. Though they have held protests in the past, they mostly agitate for greater rights, not greater autonomy. But this could change, if a US sponsored regime change is forseen.

Roughly one out of every four Iranians is Azeri, making it Iran’s largest ethnic minority at over eighteen million. The Turkic-speaking Azeri community is Shiite and resides mainly in northwest Iran along the border with Azerbaijan.

The Azeri minority is based predominately in the country’s northwest, what is called the Northern Tier of the Middle East, where Iran shares borders with Turkey and with the South Caucasus states of Azerbaijan and Armenia. The ethnic links between the Azeri of northern Iran and Azerbaijan were long exploited by the Soviet Union during the Cold War, and this vehicle for internal manipulation has been seized upon by CIA paramilitary operatives and US Special Operations units who are training with Azerbaijan forces to form special units capable of operating inside Iran for the purpose of intelligence gathering, direct action, and mobilising indigenous opposition to the Mullahs in Tehran.

But there are more foreboding signals already in store. Last May, rioting started in the northern Iranian city of Tabriz allegedly sparked off by a state-run newspaper publishing a cartoon depicting a cockroach speaking Azeri. Despite official efforts to stem discontent by punishing the newspaper editors, fighting quickly escalated following the usual strongarm response by Iranian Revolutionary Guard Corps’ anti-riot units and Basij militias against the Azeri protesters. Soon after, Iranian security forces cracked down on tens thousands of offended Azeris, taking to the streets in Tehran and in the major northwestern Iranian cities such as Tabriz, Urumieh, Ardebil, Maragheh, and Zenjan. A massive detention campaign followed, but failed to calm the outrage, which spread like bushfire, with nearly 100 Azeris beeing killed in the town of Sulduz. The Tehran central government, was quick to accuse foreign elements stirring up the unrest, in effort to undermine Tehran’s nuclear program.

In spite of this and other incidents, leading analysts estimate, that while Iranian Azeris may seek greater cultural rights, few Iranian Azeris sofar display serious separatist tendencies, or serious aspirations toward an all out uprising against the Tehranj Mullah rule. Still, the central government is extremely sensitive over possible changes of attitudes among the Azeris. Last June an attempt to hold rally at Bazz (Babek) Castle in northwestern Iran to commemorate the birthday of the Azeri national hero, Babek, who organized resistance against Arab invaders in the 9th century, prompted an unprecedented wave of arrests among Azeris in a number of Iranian cities.

Unlike other ethnic groups in Iran such as Sunni Kurds and Khuzestan Arabs, the Azeri Turks are Shiites like the ruling Persians. Having been separated from their kin in Azerbaijan by the 1828 Treaty of Turkmanchai, which gave northern Azerbaijan to Russia, it is interesting to note, that in spite of influential figures in the establishment, even such as Supreme Leader Ayatollah Ali Khamenei, being of Azeri descent, the Tehran mullahs do not hesitate to crack down hard on Azeri- Turkish nationalism. An Azeri secret organisation named Azerbaijan National Awakening Movement (Gamoh), is regarded officially as a subversive element, its leaders often arrested and sometimes even executed without trial.

The plight of Iranian Azeris is followed closely by their neighboring kin in Azerbaijan and Turkey. However, officially, the Azerbaijani and Turkish governments are extremely cautious not to damage their sensitive relations with the Iranian government. eBut to the north, to the north, in neighbouring Azerbaijan, strange things are happening already. Unofficial reports indicate the US military preparing a base of operations for a massive military presence that could foretell a major land-based campaign designed to infiltrate into Iranian territory when the time is ripe for action. While Secretary of Defence Donald Rumsfeld’s interest in Azerbaijan may have escaped the Western media, Russia and the Caucasus nations understand only too well that the die has been cast regarding Azerbaijan’s role in the upcoming war with Iran.

Meanwhile, another source of ethnic unrest in Iran is building up among the Kurds. Persisting reports, by news networks, indicate that US intelligence teams, operating with Kurdish groups are training infiltrators to gather information on potential targets inside Iran and encourage armed opposition among the Kurdish minority. A little-known clandestine organization based in the mountains of Iraq’s Kurdish north is already emerging as a serious threat to the Iranian government, allegedly staging cross-border attacks and claiming tens of thousands of supporters among Iran’s 4 million Kurds. Identified as Partiya Jiyana Azad a Kurdistanê (“Party for a Free Life in Kurdistan”), but better known by the local acronym PEJAK or PJAK, is considered to be a splinter group of the PKK, the Kurdistan Workers Party. The group claimed to have killed 24 Iranian soldiers from Iran’s elite Republican Guard in three raids against army bases last year, all staged in retaliation for the killing of 10 Iranian Kurds during a peaceful demonstration in the city of Maku. The present leader of the organisation is Haji Ahmadi. According to intelligence reports, over half the members of PJAK are women, many of them still in their teens. One of the female members of the leadership council goes by the name of Gulistan Dugan, a psychology graduate from the University of Tehran. Analysts claim, that the greater threat to the Tehran regime may come from the group’s underground effort to promote a sense of identity among Iranian Kurds, who make up 7 percent of that country’s population. PEJAK leaders predict that their effort is already spreading quickly among students, intellectuals and businessmen. It is interesting to note that unlike most other rebel groups in the Middle East, PEJAK is secular and Western-oriented. However, the group’s leaders insist that while they have had sofar no contact with the United States, they would be willing to work with Europe or America against the Tehran government.

Another source of unrest seems to be flaring up in a remote area of Iran, where central official control is faltering. Last month and armed revolt instigated by Bakhtiari, Lor and Ghashghai tribes comprising over three million, against the Islamic Regime was reported by clandestine news networks. There were claims of freedom seeking tribal fighters in the Isfahan and surrounding provinces which began fighting local Islamic Regime forces in an attempt to free their villages from the Islamic Regime’s control. According to these reports, the Semirom area, some 590km from Tehran, which is on the Ghashghai tribal migrations route, apparently saw heavy fighting occurred in between Isfahan Province and Yassooj further south, which is the center of the Boyer-Ahmadi tribal territory. Local fighters from the various tribes, confronted Islamic Regime paramilitary forces – the IRGC (Islamic Revolutionary Guard Corps) and the Bassij . The heaviest fighting took place apparently at a point around Yassooj and in the Province of Fars which was labeled the Red Line which was not to be crossed by the central Regime forces.
Much of the unrest is said to stem from the Islamic Regime’s on-going efforts to disarm the tribes and put religious leaders in charge of them instead of their traditional Khans. The rough and difficult mountainous terrain, which severely limits mobile forces and the stiff resistance put up by the tribes, have prevented government militias from penetrating into Bakhtiari and Ghashghai tribal areas The tribe leaders hope, perhaps somewhat premature, that their uprising will spread south to Shiraz and Masjid Soleiman in the Khuzestan oil province ( link to our story) and even become a national uprising across the country.