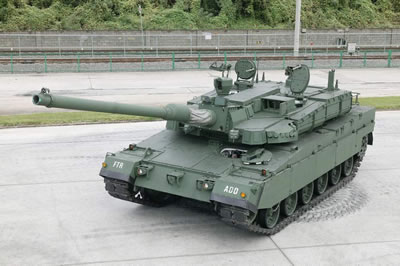 The Republic of Korea is planning to field new XK2 tanks in 2011, gradually replacing the K1 tanks current in service. ADD is one of two finalists competing for a Turkish main battle tank acquisition tender, where it is competing against a version of the French Leclerc tank offered by GIAT. Given traditionally stressed relations between Turkey and France, Korea’s chances to win the program are considerably high. Turkey plans to select one of its domestic companies to lead the next-generation tank project in the spring of 2007. According to ADD officials, as the tank enters production in 2009, it is expected to cost about 8.3 billion won (US$7.9 million) a piece.

The new Korean tank was unveiled by the Korean Agency for Defense Development (ADD) last week. The development of the new tank began in 1995. About 240 billion won ($230 million) have been invested in the program so far. The 55-tons tank is armed with a smoothbore 120mm 52 caliber gun, and an autoloader. It has a road speed of 70 km/h and can cross water obstacles up to 4.1 meter in depth. The tank is equipped with advanced optroncis, communications and command and control systems.