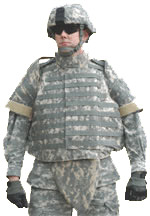 Brig. Gen. R. Mark Brown, Program Executive Officer Soldier agreed to release a June 2006 test results rebuffing claims that commercially available body armor is supperior to the Interceptor Body Armor the Army issues to warfighters. Gen. Brown said the Army had been reluctant to release test results that could inform the enemy of U.S. capabilities. “Right now, we believe it’s critical that our Soldiers have confidence in their equipment and that their families know force protection is the Army’s number one priority,” Brown said.

Driving the decision to release May 2006 test data is an assertion by Pinnacle Armor Inc. of unfair treatment. The issue surfaced again in this week’s investigative report aired by NBC. Pinnacle, based in Fresno, Calif., is the manufacturer of Dragon Skin SOV3000 body armor, which Brown said failed “catastrophically” when it was tested by HB White Labs in Street, Md., one of two labs in the nation certified by the National Institute of Justice. “It failed to stop 13 of 48 [first- or second-round] test shots,” Brown said of the testing at H.P. White. “The CEO and vice president of Pinnacle witnessed it. One bullet penetration is cause for failure to meet the Army’s standard.”

According to Gen. Brown, Pinnacle’s Dragon Skin SOV3000 body armor was subject to the same fair and independent testing, in a variety of environmental conditions, as products from the six producers of the Army’s current body armor. All six of the current producers passed every test with zero failures, which is the standard. In addition to failing ballistic testing, Dragon Skin is also operationally unsuitable because of its greater weight and bulk and compared with the Army’s body armor. Depending on size, Pinnacle is 46% to 70% heavier than the current IBA. “We are trying to make the armor lighter, not heavier,” Brown said. It should be noted, however, that DragonSkin provides full side protection with the baseline system, while IBA requires two additional ESBI modules which add more weight to the system.