Modern Armored Fighting Vehicles (AFV), such as the M-1A2, Challenger II, T-80 Leopard II and Merkava Mk4 are all demonstrating superb armor protection based on advanced armor concepts. However, the proliferation of new generations of Anti-Tank Guided Missiles (ATGM) and the wide use of hand held anti-tank rifle grenades (such as RPG) pose a serious threat to even the heaviest protected vehicles, as attacks are carried out at close range and from all directions.

Protection all around by passive armor is becoming too heavy for even the heaviest tanks, and even these cannot stop all threats in all directions. Therefore, a modern armor is a suite of protection means, comprising of relatively thin shell of ballistic steel and composite armor, (also known as hybrid armor) which can be designed to provide optimal protection from specific threats. Such armor can accommodate steel, various combinations and matrixes of composite materials, soft and elastic heat absorbing materials, kinetic energy (KE) absorbing materials such as ceramics, or depleted uranium and energetic materials (various explosives) that form reactive armor elements. A typical utilization of compound armor, designed to counter specific threats was designed for the British Challenger II and the latest upgrades of the German Leopard 2, as well as the Merkava Mk 2 Type C (shown below). The later uses augmented armor to counter roadside bombs and mines, anti-tank missiles and RPGs. This armor was added on the standard Merkava Mk3 and was later integrated into the Mk-3 Baz version of the tank (pictured below left). 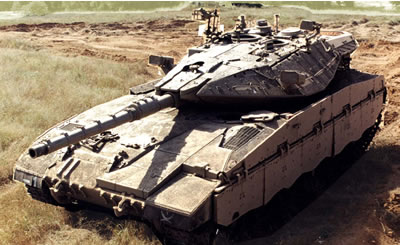 Future applications of lightweight hybrid armor can also adequate protection from small caliber ammunition, as well as Chemical Energy (CE – HEAT) threats, but are not providing full protection against KE threats. Future Combat Systems (FCS), as well as upgrades for existing platforms, will rely on a combination of passive and active protection, as well as detection avoidance and stealth. Full implementation of today’s Defensive Aids Suites is expected to increase the platform’s survivability in up to a factor of two. The addition of advanced ceramics, as well as composite-based lightweight armor, that already provides effective protection against small arms up to 14.5mm, is expected to defeat medium caliber guns ammunition (such as 35mm HE/AP (High Explosive / Anti-Tank) cannon projectiles) by 2006. Providing lightweight and effective protection against KE threats is yet to be proven, yet the use of advanced composite armor and new technologies currently being explored, is expected to yield a solution by 2015.