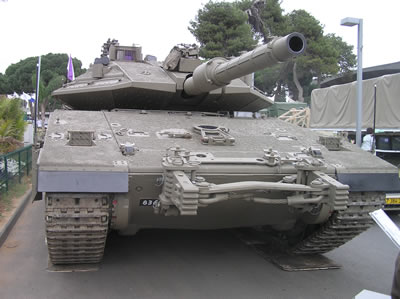 The IDF performed various modifications to its Merkava Mk 3 tanks, specially designed for MOUT combat. The tank was fitted with marking poles, which assist the commander and driver in movement in narrow streets, minimizing damages to surrounding structures. To eliminate the chance of individuals planting explosive charges into the air intakes, wire meshes were added to close such openings, as well as protecting the optic  sights. A redesigned commander’s cupola was also installed, offering supperior visibility at higher elevation. The external 0.5″ machine gun, mounted on top of the main gun was linked to the fire control system and can now be fired by electrical actuation under armor. The IDF realized that the 0.5″ is more effective in urban warfare. A firing hatch and observation window was also opened in the rear access door, where a sniper or sharpshooter can operate, from a protected position. The tank can use less than lethal stun cartridge, designed for effect at a range of up 30 meters. Another system demonstrated for the first time at LIC-2004 is a 360 degrees omni-directional panoramic camera  alerting the crew, when closed down, on any suspicious activity around the tank. The system can be utilized in combat situations, securing tanks in positions as well as protecting armor in parking area.

More LIC modifications were demonstrated on Merkava Mk 4 during LIC-2005. These modifications included the protection of optronics, including the commander’s panoramic sight, and the installation of a rammer in the front of the tank. Installation of an add-on belly armor protection is also optional, when required.
Additional modifications transforming the Merkava into an armored  medical evacuation vehicle were provided for several Merkava Mk 3 tanks operating in the Gaza strip. The modification includes permanent attachments installed in the rear compartment, for two stretchers, lighting equipment and mountings for intensive care equipment, including controlled ventilation, oxygen, suction, IV and monitoring gear. The ambulance-tank enables the evacuation of two wounded soldiers on field stretchers, accompanied by two medical personnel. The modifications do not effect the combat performance of the modified tank.