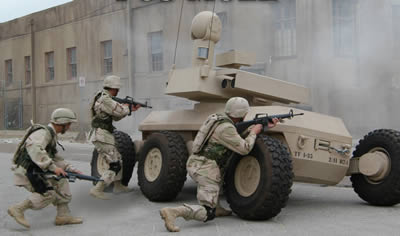 Lockheed Martin’s Multifunction Utility/Logistics and Equipment (MULE) autonomous vehicle is developed by Lockheed Martin for the US Army Future Combat Systems program. The vehicle is designed to carry the load of two infantry squads, totaling about 2,000 pounds (907 kg), and support troops with water and power sources for extended operations. The estimated cost of each MULE platform (without mission systems) is expected to be US$300,000.

The Mule will be a “follower” to the human team. Each of the team members will be able to order the Mule to come forward, to support the operation. Otherwise, the vehicle will maintain a safe distance behind the team, waiting for orders. Like its human combatants, the Mule will have day and night thermal sights, while additional sensors, such as forward-looking imaging systems and chemical biological sensors will be installed in a forward payload to support team operations. The mule can communicate with and sometime, deploy unmanned aerial and ground vehicles (UAV/UGV) to give the squad members a true 360-degree image of the battlefield. 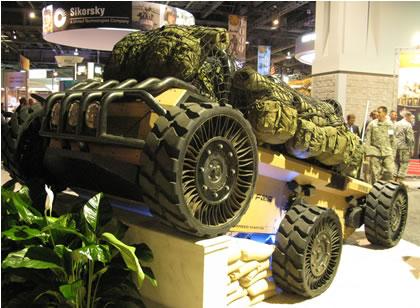 At AUSA 2008 Lockheed Martin displayed the latest configuratio of the MULE which recently received new wheels, utilizing springs made of composite materials, instead of inflatable tires. These wheels are less vulnerable to small-arms and fragments hits, and can operate continuously without replacement or maintenance even after suffering severe damage or hits.

The future system will employ hybrid electric propulsion, with in-hub motors powering each wheel, providing extreme mobility in complex terrain, far exceeding that of vehicles using more conventional suspension systems. The MULE’s unique mobility will enable it to follow everywhere the soldier can go and more. MULE will be able to travel cross country at speeds of 43.5 mph (70 km/h), climb and cross obstacles 3.28 ft (1 meter) high or wide, traverse side slopes greater than 40 percent, ford water to depths over 1.64 ft (0.5 meter) and overpass obstacles as high as 1.64 ft (0.5 meter) while compensating for varying payload weights and center-of-gravity locations. MULE will be transportable internally in a CH-47 Chinook or C-130 transports, and could be sling loaded under a UH-60 Black Hawk helicopter. 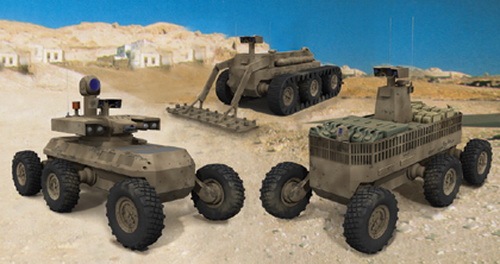 The MULE includes three variants: Armed Robotic Vehicle – Assault (Light), Transport and Countermine. The assault version will be armed with rapid-fire suppressive weapon and anti-tank missile launchers. It is designed to provide immediate heavy firepower to dismounted troops. The Transport MULE will be configured to support the Future Force Soldier by providing the volume and payload capacity to carry the equipment and supplies to support two dismounted infantry squads. Multiple tie-down points and removable/foldable side railings support virtually any payload variation, including casualty evacuation. The Countermine variant is designed to detect and mark mines and minefields, greatly increasing the safety and mobility of the infantryman.
Currently at an engineering evaluation phase, MULE is expected to mature into a full scale development system and be ready for deployment with the first FCS units of action, around 2013-1014. The company expects a requirement for 1,530 vehicles, based on current Army plans.