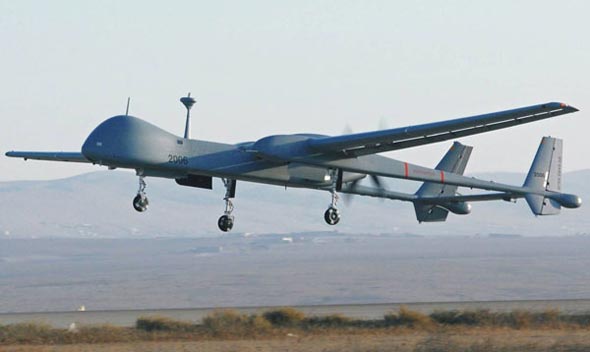 Weighing over four tons, Heron TP – also dubbed Heron 2 or “Eitan”, by its Israeli Air Force (IAF) designation – is designed to fly at high altitude on missions spanning over several days. Israel was seeking a MALE UAV capability for many years, in fact, the first application of an armed MALE UAV was considered in the mid 1990s, as an alternative for the Arrow ballistic missile defense system, also developed by IAI. Eitan, derived from the `heron TP platform, was developed under an Israel Ministry Of Defence (IMOD) program.

While the program is unveiled in June 2007, Heron TP has already matured and, according to IAI, it is ready for serial production. Designed as a Multi-payload, Multi-mission platform to answer the requirements of the Israel Air Force, the HERON TP is powered by a single 1,200HP Pratt & Whitney Canada PT6A Turbo-Prop engine, powering a four blade propeller. The use of such powerful turbo-prop engine enables the aircraft to climb and operate at altitude above 40,000 ft avoiding any airspace conflict with commercial aircraft traffic. Using on board fuel and power resources, Heron TP is able to sustain continuous missions for over 36 hours with full mission payload. The aircraft is also equipped with deicing systems protecting the aircraft when flying through icing conditions.

With maximum takeoff weight of 4650 kg, the 14 meter long aircraft can carry over 1,000 kg of sensors in its forward section, main payload bay, and the two bulges located at the end of each tail boom, offering optimal separation for specific systems. Other stores can be mounted along the wing, in internal and external positions. Heron TP could be fitted with wing hard-points for external stores. The aircraft is equipped with multiple datalinks, supporting line-of-sight (LOS) and Beyond Line of Sight (BLOS) links via satellite communications.

The giant drone maintains the twin tail boom principle offering stable and redundant design and large payload bay located around the aircraft center of gravity, uninterrupted by the landing gear. This configuration allows for quick and simple payload reconfiguration on the flight line. Emphasis has been placed on the aircraft airworthiness design. Highest safety and reliability standards are used, including triple redundancy and fully Automated Take Off and Landing were embedded in the Heron TP, enabling it to fly safely also over urban areas.
The new platform will be able to deploy multiple sensors, and fly on extended missions for extended durations, beyond the capabilities of current UAVs. To enable extended operations, Eitan uses new highly redundant avionics suite based on new generation of UAV avionics and controllers developed by RADA.