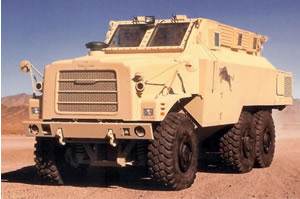 The vehicle is configured to accommodate six or 10 troops in a highly protected hull. According to Ceradyne, the Bull design has been subjected to, and has withstood, Explosively Formed Penetrators (EFP). The elevated armored cabin is surrounded up to 3/4 of its height with flat thick side armor, protecting the vehicles against most vulnerable standoff attacks by EFP based roadside IEDs. This armor adding to the cab’s integral sloped (V shaped) hull is protecting the Bull from attacks underneath.

The integrated flat armor surface increases both ballistic and blast protection by avoiding the weak points and seams created by common add-on armor, associated with earlier solutions. This concept also motivated designers to eliminate side doors, making the Bull accessible only from the rear door. (Emergency escape could be provided through hinged side window panels). All vulnerable elements were removed from the lower section and moved back to the flatbed at the vehicle’s rear, including the fuel tank, air conditioning and auxiliary power unit. In addition to the standard and special armor, the Bull uses thick two-piece armored windshields and small side and rear windows improving surrounding situational awareness. The current model does not have firing ports.

The BULL was developed by an industry team including Oshkosh Truck Corp., Ceradyne and Ideal Innovations. Sofar the team developed two prototypes, representing the 6 and 10 troop variants. The first two Bulls were delivered to the US Army for testing at the Aberdeen proving ground.

According to Marc King, Vice President of Armor Operations for Ceradyne, the vehicle is specifically designed for close urban terrain and can survive the most lethal IED (improvised explosive device) threats faced by ground forces in Iraq and Afghanistan, including explosively formed penetrators (EFPs). “We feel this is a clear technological leap forward in crew survivability.” said King.

Future procurements of the BULL are under discussion with several government agencies, in addition to the Department of Defense, who have expressed interest. Read more on the Bull at DefenseIndustryDaily.