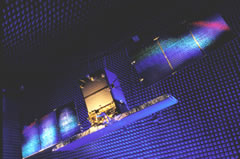 On June 7th, the Boeing successfully launched the first element of four SkyMed radar satellites comprising the Constellation of Mediterranean basin Observation (COSMO). The entire constellation will be deployed in space by 2009. The SkyMed satellite was launched to a low-Earth orbit by a on a Boeing Delta II rocket. These dual-use (civil and military) satellites were developed by Thales Alenia Space Italia under a joint Italian Space Agency and the Italian Ministry of Defence program. The system will take imagery of the Earth using an X-Band Synthetic Aperture Radar instrument capable of operating in all visibility conditions at the request of institutional and commercial users, including members of the defense, civil and scientific communities.

According to bilateral agreements, COSMO resources will also be available for use by the French government and by under an inter-governmental agreement (ORFEO), as well as with Argentina, with whom the Italian Space Agency (ASI) is cooperating in the civilian sector to develop the SIASGE program – Sistema Italo-Argentino de Satélites para la Gestión de Emergencias. SIASGE was initiated in 2005 under an agreement between ASI and its Argentine counterpart CONAE in the scope of natural disasters management. The data that will be collected by the COSMO-SkyMed constellation will also be augmented by Argentine SAOCOM constellation, comprising 2 L-band SAR satellites offering uniquely large datasets for environmental monitoring, surveillance and risk management, environmental resources management, maritime management and science applications.