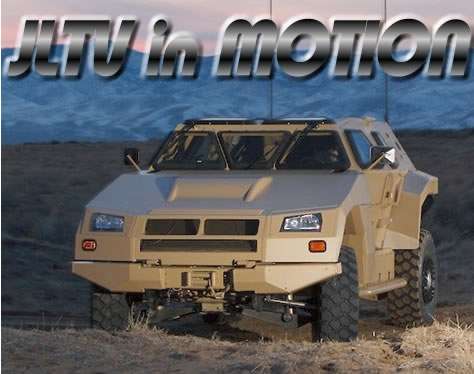 The U.S.Army was designated as the lead service of the Joint Army/Marine Corps program. On February 5, 2008 the Army released the Request for Proposal (RFP) inviting suppliers to submit proposals for the development of a JLTV Family of Vehicles (FoV). The Army plans to evaluate at least three industry teams through the system’s 27 month development and demonstration phase, maintaining multiple contractor teams through the low-rate initial production.

The JLTV Family of Vehicles (FoV) will utilize, as much as possible, the most advanced, yet mature technologies Technology Readiness Level (TRL) 6 or higher), being developed for other DoD programs, including the Army’s Future Combat Systems program, and other incumbents and studies, sponsored by the Army Tank Automotive Research Development and Engineering Center (TARDEC) developments, Army Research Lab (ARL), and the Office of Naval Research (ONR). While the program is designed for the U.S. military, it is anticipated that JLTV, like HMMWV preceding it, will be adopted by many armies around the world. Several foreign governments have already expressed a strong interest in joining the development of the JLTV vehicles.

The 27 months Technology Development phase is scheduled to continue till 2010 and involve three teams. During this phase vehicle models will be designed and fabricated in 2009 being tested in 2010, leading to the selection of two teams for the System Development and Demonstration (SDD, Milestone B) in 2011. This phase will continue through 2012 and focus mainly on testing, leading to a final selection of the winning design and awarding production contracts (Milestone C) by FY 2013. The final decision will also address considerations such as fuel efficiency, life cycle operations and support improvements such as cost reduction, reliability growth, reduction of annual maintenance man hours, and accelerated deliveries. 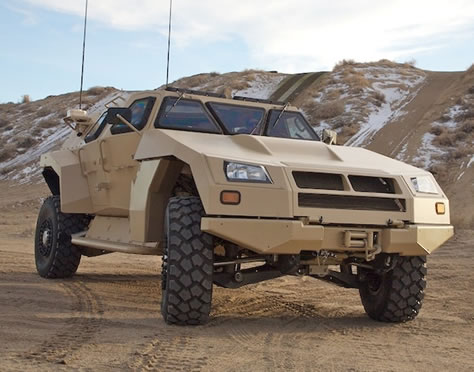 US Undersecretary of Defense John J. Young guided the services to seek foreign participation in the program, especially with the UK and Australia. Several industry teaming have already been formed to compete. By 2011 the current technology demonstration phase will transition System Development Demonstration (SDD) phase where two contractors will complete the design and development of the JLTV FoV, and companion trailers. The Army expects to select a single supplier for the entire vehicle family.

The teams that already expressed their intention to participate include:

Five payload categories will address the range of vehicle derivatives in the JLTV family of vehicles (FOV). Each team is expected to build seven vehicles, four ballistic hulls and four trailers. The vehicles include a four-seat general purpose variant (JLTV-A-GP) which will be common for both services. This version is expected to be the lowest weight configuration. A C-130 transport aircraft could take two of these JLTVs each loaded with 3,500 lbs of payload. It will also be carried externally (sling loaded) by a CH-53 or CH-47 helicopter. All other versions of the JLTV are expected to be heavier, and although each could be carried by CH-53/CH-47, only one vehicle could be carried in a C-130.

As for the infantry carrier, different versions will be required for the Marines and Army, since each service has different transportability requirements. Both will be required to carry an infantry or marine fire team (6 seats). Reconnaissance versions will also be deployed as scout and target designation (Knight) assets. The two infantry carrier variants could be based on the same vehicle as the height and other external dimensions could be common for both platforms.

A four-seat Command and Control On-The-Move (JLTV-B-C2OTM) variant will also be common for both services. Similar configuration will be used for the Heavy Guns Carrier variant, to be used for escort, patrol and security missions by both services. This vehicle will accommodate four soldiers and a gunner. A two-seat utility vehicle capable of carrying a shelter carrier or used as prime mover. A JLTV based protected ambulance will also be designed, with accommodation of a crew of 3 and two litters. These vehicles are characterized as ‘Category B’, capable of carrying payloads up to 4500 lbs. A heavier ‘Category C’ variant will be abe to carry up to 5,100 lbs, configured as shelter carrier, utility vehicle and an ambulance with capacity for four litters. All vehicles will be geared to carry an integral trailer with additional payload capacity of 6,100 lb.

The current mix of tactical vehicles operated by the U.S. DoD has several drawbacks. The vehicles do not have basic protection and require heavy add-on armor, severely limiting their performance and payload carriage capability. Where sufficient armor is available, vehicle transportation and support to-and-around the theater of operation is severely degraded, since they are outsized and overweight for most transportation and recovery platforms. Furthermore, their electrical power generation capacity is inadequate for current requirement, supporting “power-hungry” devices such as multiple radios and computers, remote weapon stations, multiple electronic devices including high power jammers (CREW) and other countermeasures.

In contrast, JLTV will be designed for commonality beyond major components, to include repair parts, tools, training, system design, maintenance procedures and sources of supply. JLTV will have the same soft soil mobility as HMMWV, improved off-road and on-road performance in dry conditions and superior capability in urban terrain, addressing lessons learned in recent combat mobility experience in Iraq and Afghanistan.

The vehicle will be designed to be ‘ballistic tolerant’, enabling the crew to escape ambush zones, remaining mobile, even after the vehicle is being hit. It will incorporate crew counter-fire-protection and other basic safety improvements. Built-in means of recovery will include self recovery (by Winch), buddy recovery by another JLTV and recovery by wreckers. JLTV will be designed to avoid rollover, and remain resilient once it occurs.

Unlike earlier considerations of using hybrid electric propulsion, JLTV will be initially powered by diesel engines. Although the Army considers Hybrid Electric Vehicles (HEV) powered vehicles have a great promise, they are yet to prove their maturity. The Army is cautious about batteries not yet offering the required energy density in a compact power and weight form. Batteries are still too bulky, and too expensive. One of the advantages of the hybrid-electric vehicles is exportable power. However, the Army considers current systems to be overweight and oversized for useful applications. Another area for improvement is the thermal management. Despite the current limitations, HEV will become a central element for future tactical ground forces and is addressing these issues with several ongoing programs, expected to be concluded by the end of the decade, paving the way for full-scale fielding of Hybrid Electric Drive (HED) vehicles within 5-7 years. Compared to the current vehicle fleet, JLTV will fit into existing maintenance and support infrastructure, introducing significant improvement in reliability, compared to the current HMMWV, given the modular approach and component commonality to repair and replacement, improving the speed of repair and availability of spare parts.

Fuel efficiency is not a major factor in the system’s preliminary design, but maximizing fuel efficiency will be a major consideration in the final selection process. Power generation and energy storage are also addressed, to meet current and future unit-level power requirements. Vehicles will also utilize upgradeable power generation and storage capacity, supporting specific requirements and future advances. 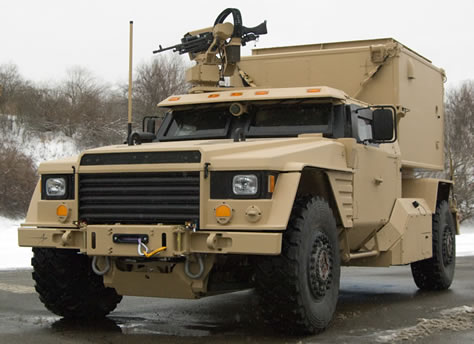