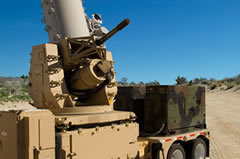 The Extended Area Protection and Survivability (EAPS) program is part of an advanced technology objective (ATO) pursued by the U.S. Army’s Aviation and Missile Research, Development, and Engineering Center (AMRDEC), seeking to protect U.S. forces against attack by rockets, artillery, and mortars (RAM). The program anticipates the use of guided munition technologies to intercept RAM threats. The system, comprising interceptors, sensors and fire control systems will provide stationary and mobile forces with 360-degree hemispherical ‘umbrella’ extending area protection from direct and indirect fires.

In February 2008 Lockheed Martin and Northrop Grumman Space & Mission Systems were awarded $8.6 and $5.9 million contracts (respectively) to design prototype hardware for EAPS Battle Element. Both companies are expected to present their competing systems to the Army by the end of 2012.

The contract calls for the design, fabrication, integration and test of the prototype hardware, and is structured as a base award to be followed by four options aligning to the five phases of the program. Phase 1 culminates in a Preliminary Design Review. Phase 2 includes Hardware-in-the-Loop and a Critical Design Review, paving the way to demonstrating intercepts of individual RAM targets in Phase 3 and multiple simultaneous intercepts of RAM targets in Phase 4. Phase 5 is a risk-reduction phase in anticipation of the System Development and Demonstration program, ultimately leading to a production program providing a significant improvement in C-ram capabilities.

A parallel Israeli program is in more advanced stages, with RAFAEL expecting to conduct initial test demonstrations of the Iron-Dome Wide Area Counter-RAM system later this year. The system, promoted by the Israeli Ministry of Defense as an urgent requirement to defeat short range rockets, both Palestinian fired Qasam improvised rocket and 107mm and 122mm Katyusha and Grad rockets, deployed by Hezbollah. The Israeli system will use a low-cost, autonomous guided missile designated Tamir, to defeat only those rockets projected to cause damage or risk to designated targets.

The Iron Dome C-RAM system is designed as a mobile defensive solution countering short range rockets and 155 mm artillery shell threats with ranges of up to 70 km in all- weather conditions, including low clouds, rain, dust storms or fog. The system uses a unique interceptor missile equipped with a special warhead that detonates any target in the air within seconds. The Iron Dome radar, based on Elta’s Advanced Artillery Radar (AAR) will detect and identify the target and monitor multiple trajectories of incoming salvo in real time.

Target data will be transmitted to the Battle Management & Weapon Control (BMC) for processing, where each trajectory is extrapolated to analyze the expected impact point. If the estimated rocket trajectory poses a critical threat, a command is dispatched directly to the best placed launcher for immedate launch and intercept of the threat. The interceptor receives trajectory updates from the BMC via uplink communication. As it approaches the target, the missile employs its radar seeker to acquire the target, guiding the interceptor to pass at close proximity to the target. The location of the intended kill is calculated to be employed over a neutral area, therefore reducing collateral damage to the protected area.

Other companies engaged with the CRAM challenge is Raytheon, offering the Land-based Phalanx Weapon Systems (LPWS) called Centurion. This rapid firing guided gatling gun represent a revolutionary approach to point defense, as they are designed to intercept rockets, artillery and mortar rounds in the air before impact, thereby reducing or eliminating any damage they might cause. The system comprises the sensors, fire control and weapon in a single integrated unit, providing situational awareness, precision fires, real-time targeting and kill assessment. In Novebmer 2007 Raytheon was contracted by the Pentagon to build 12 Centurion units to protect coalition operating bases in Iraq. In this role, the LPWS is integrated with counter-battery radar systems such as TPQ-36/37 which will be augmented in the future multi-mission radar known as EPQ-36. Raytheon is also proposing an enhancement to the system, utilizing parallel solid-state high power laser as an effector, replacing the gun.

While their Iron-Dome missile interceptor capability is maturing, following recent successful tests Israel is considering enhancing the system introducing short-range counter-mortar capability. Despite the Israel MOD previous rejection of the Centurion system, Israel’s Minister of Defense Ehud Barak reportedly authorized the MOD to request the system from the USA with priority. Israel is also fielding a new mortar locating radar to better cope with short range mortar attacks, that are harder to detect and could cause considerabe damage to border towns and military facilities.