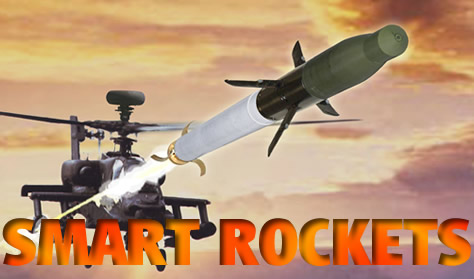 A new class of guided weapons currently being introduced is a guided version of the free-flight rocket, (2.75″ and 80mm). Formerly known as Advanced Precision Kill Weapon System (APKWS) the system employs standard or new production 2.75″ rockets, fitted with new mid-body or fore section containing seeker assembly, electronics and guidance system. At a cost estimated between US$10,000-15,000, APKWS will dramatically increase kill-per-sortie rate, and reduce the risk of collateral damage, particularly in asymmetric warfare scenarios, while improving platform survivability. APKWS is developed by an industry team led by BAE Systems (teamed with Northrop Grumman and General Dynamics).

Several development programs are currently underway in the US. The US Navy is leading the development of APKWS to augment the Hydra 70 or 5″ Zuni rockets employed by the US Marine corps. Another type of rocket, known as Low Cost Guided Imaging Rocket (LOGIR) is under evaluation for special operations MH-60S helicopters. These rockets will interface with the aircraft systems through a new digital rocket launcher. It will receive targeting data from an on-board FLIR. After launch, LOGIR will use inertial navigation midcourse and low-cost bolometric IR imager for precision terminal attack. LOGIR will retain the MK66 rocket motor and M151 warhead, introducing a new fore section comprising the imaging terminal sensor, guidance and control modules.

Since the technological risk associated wit such program is minimal, and the marketing potential is high, many missile producers are developing guidance kits for the Hydra 70/2.75″ rockets. Among these are Lockheed Martin and Raytheon, original producers of the Hellfire and TOW missile systems. Lockheed Martin developing the Direct Attack Guided Rocket (DAGR) while Raytheon, which lost a previous APKWS program, announced a teaming agreement with Emirates Advanced Investments of the United Arab Emirates to develop and produce semi-active laser guided rockets. According to plans, the laser guided rocket will be qualified on a single platform in the UAE platform, to be followed by integration onto additional platforms. Israel’s Elbit Systems is also developing its own version for the laser kit converting standard 68/70mm rockets into an affordable guided weapon, offering ‘metric’ precision.