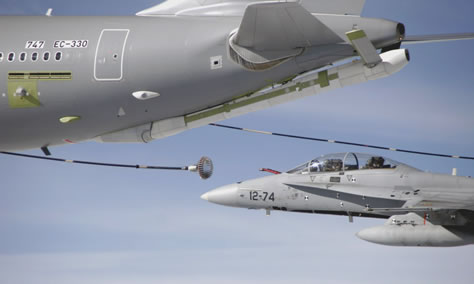 The U.S. Government Accountability Office (GAO) recommended the Pentagon re-run the competition offering aerial refueling tankers to the U.S. Air Force. Northrop Grumman won the bid to sell the Air Force 179 European designed (domestic U.S. built) EADS Airbus A330 transport jets for $35 billion. The losing bidder, Boeing Co (NYSE:BA) protested the decision. GAO sustained Boeing’s protest adding the Air Force made “a number of significant errors that could have affected the outcome of what was a close competition”. The Air Force “conducted misleading and unequal discussions with Boeing” by telling the company it had fully satisfied a key performance criteria, then later determining that Boeing had only partially met the objective, the GAO said.

Feb 29, 2008: The U.S. Air Force announced the selection of Northrop Grumman (NYSE:NOC) to build its next-generation air-refueling tanker aircraft. The estimated $35 billion program calls for the production up to 179 new KC-45A tankers, to be built over the next decade. The KC-45A is based on the A330 Multi-Role Tanker Transport (MRTT) system, built by Airbus, a division of the European aerospace giant EADS. Northrop Grumman teamed with EADS to introduce the MRTT as a competitor to the US built KC767 proposed by Boeing. Northrop Grumman stressed that although the A330 is a European aircraft, the KC-45A will essentially be a US built aircraft – as it is supported by 230 domestic suppliers contributing about 60% of the platform’s content. Furthermore, the program will support more than 25,000 jobs in the USA. According to Northrop Grumman the manufacturing and support infrastructure for the KC-45A will create a new ‘aerospace manufacturing corridor’ in the Southeastern USA, creating 2,500 new jobs in and around Mobile Alabama, where the new aircraft will be assembled.

More than a KC-135 Replacement

According to the US Air Force the KC-45A will introduce a significant increase in performance, compared to the current KC-135. Furthermore, as a secondary role, it will be able to fly passengers, cargo, casualties and fuel over long distances. The aircraft will therefore expand the U.S. air force’s flexibility to support operations in distant theaters. Its mission endurance and range could be further extended by aerial refueling from other tanker (current KC-135s partially support such capability today). The KC-45A will have the capability to carry an air refueling pod on each wing. It will be equipped to support US Air Force aircraft, as well as US Navy, Marines and aircraft operated by allied air forces. Since different refueling systems (boom and probe) are employed by the Air Force and Navy aircraft, the current KC-135s must be set up for each specific task before takeoff (only 20 of the KC-135s are geared for this capability today). The KC-45A will be equipped for both systems on every flight and also will have connections for wing pods. When wing pods are installed, it will be able to refuel two probe-equipped aircraft, such as those flown by Navy and many allied aircrews, at the same time. In this configuration it will cut almost in half the amount of time it takes a four-ship formation to cycle across the tanker. The new tanker will also be able to download fuel to storage bladders on the ground, supporting ground vehicles, reducing some of the burden and vulnerability from ground bound supply convoys. To improve its survivability to guided surface-to-air missiles, the aircraft will be equipped with defensive therefore expanding its capability to operating from or within dangerous environments that current tanker aircrews usually avoid.

The Air Force should receive the first group of operational KC-45A aircraft around 2013. The Air Force is awarding Northrop Grumman an initial $1.5 billion contract for the design and development of the KC-45 system, and the delivery of four KC-45 test aircraft. This contract also includes five production options targeted for 64 aircraft at $10.6 billion. 128 Future orders are expected to bring the total program value up to $35 billion.

As part of the selection process, the air force compared two proposals, provided by Boeing and Northrop Grumman. The evaluation compared the two platforms along nine key performance parameters and five evaluation factors: mission capability, proposal risk, past performance, cost/price and an integrated fleet air refueling assessment performance in a simulated war scenario. Next week the Air Force is planning to debrief both bidders about the process and how each proposal fared in the evaluation.

The Boeing Company (NYSE: BA) complained about the delay and filed a request to receive an immediate debriefing. According to Mark McGraw, vice president – 767 tanker programs, their proposal should have been lower than the competitor, “Based on values disclosed in the Air Force press conference and press release, the Boeing bid, comprising development and all production airplane costs, would appear to be less than the competitor” he said. Boeing viewed the tanker competition as ‘must win’ top priority program. “We bid aggressively with specific focus on providing operational tanker capability at low risk and the lowest total life cycle cost,” said McGraw. Boeing hints that there may have been factors beyond those stated in the RFP, or weighted differently than originally planned, during the evaluation and decision process. “It’s important for us to understand how the Air Force reached their conclusion” said McGraw.

Following a debriefing on the decision by the Air Force on March 7, 2008 Boeing officials spent three days reviewing the Air Force case for its tanker award. A rigorous analysis of the Air Force evaluation that resulted in the Northrop/EADS contract led Boeing to the conclusion that a protest was necessary. Based on the review Boeing announced it plans to file a protest asking the Government Accountability Office (GAO) to review the Air Forces’ decision. “Based upon what we have seen, we continue to believe we submitted the most capable, lowest risk, lowest Most Probable Life Cycle Cost airplane as measured against the Air Force’s Request for Proposal,” Jim McNerney, Boeing chairman, president and chief executive officer. “We look forward to the GAO’s review of the decision.”