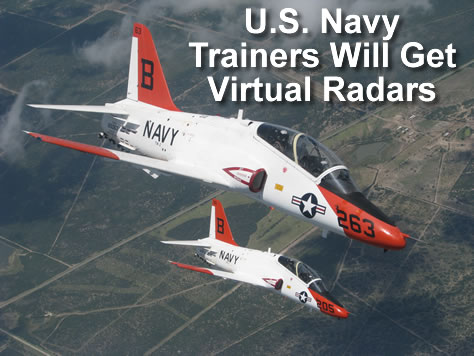 The U.S. Navy pilots training on the Boeing [NYSE: BA] T-45 will soon get a radar screen in their cockpits’ although these radars will not be able to actually detect enemy aircraft, they will be integrated into the training mission by simulating a realistic situational picture showing real and simulated targets. The realistic radar training is part of the Virtual Mission Training System (VMTS) for the T-45 this segment will be provided by Elbit Systems [NASDAQ: ESLT]. Boeing is currently under contract to develop the VMTS capability. Subsequent phases of work will provide for two test aircraft and then for retrofit of 18 existing aircraft with VMTS by 2012.

VMTS simulates via data link an unclassified, mechanically scanned tactical radar that provides air-to-air and air-to-ground modes as well as simulated weapons and simulated electronic warfare. These functions can be networked between the participating aircraft and instructor ground stations that control the mission presentation. The current phase of VMTS work will provide flight officers with in-flight training in the use of radar and weapons against virtual enemy aircraft, including cooperative training with friendly real and virtual aircraft.

The T-45 entered service with the U.S. Navy in 1992. Boeing recently rolled out the 210th Goshawk from its St. Louis assembly facility and remains under contract for 11 additional aircraft. Approximately 3,500 Navy, Marine Corps and international student aviators have earned their wings in the T-45. “VMTS will enrich the undergraduate military flight officer’s weapons-and-tactics curriculum, producing flight officers who are better prepared to transition to carrier strike-fighter and electronic-attack duty,” said Barbara Wilson, T-45 Training Systems director and program manager for Boeing.