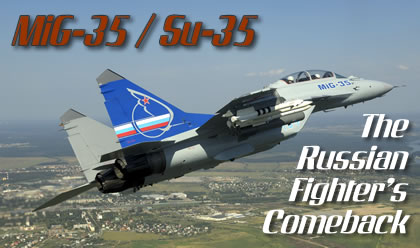 Sukhoi 35 and MiG-35 will soon join other Russian fighters at the stables of Russia’s national United Aircraft Corporation (UAC). The designer and producer of the venerable MiG, Russian Aircraft Corporation (RAC) announced plans to join UAC later this year. RAC has been listed earlier this year as a public joint stock company traded at the Moscow stock exchange. MiG-35 will be available for demonstration this year, while the larger Su-35 has recently made its public debut during a demonstration flight arranged for defense attaches and foreign representatives near Moscow, marking the beginning of an aggressive marketing campaign positioning the Russian strike fighter as a viable competitor against western 4+ and 5th generation competitors.

The new fighter differs from the Su-30MKI in the absence of the canard foreplanes, resulting from the introduction of a new fly-by-wire control system, integrating all flight control surfaces and wheel-brake control to fly the aircraft. The Su-35 uses 12 hardpoints to carry weapons and external fuel. Like other Generation 4++ fighters, Su-35 was designed with reduced radar cross section, particularly in the X-band (fire control) band, reducing detection in head-on engagement. Su-35 uses two Saturn 117S turbofan engines prepared for thrust vectoring capability if such option is selected by the client. The cockpit uses two large (15 inch) high resolution (1400×1050) color multifunction displays providing optimal situational awareness and control of all aircraft functions and weapons. The HUD has a field of view covering 20×30 degrees. The aircraft is equipped with the Ibris-E phased array radar which can detect aerial targets wit cross section of 3 m2 head on from 400 km. It is capable of tracking up to 30 air targets while continuously scanning the airspace, and engaging up to eight targets simultaneously. In air/ground mode the radar can track four targets simultaneously and engage two of them with different mapping modes. The Ibris-E is a new radar currently undergoing flight testing, in anticipation for future introduction into production versions of the Su-35.

For the smaller and presumably more affordable MiG, the most significant prospect for MiG is the MRCA tender in India, where Moscow is offering the MiG-35, the latest, most sophisticated derivative of the Fulcrum platform.

Anatoly Belov, Director General of the MiG Corporation said his company plans to demonstrate a single seater MIG-35 and two-seater (MiG-35D) to the Indian Air Force by year’s end or early 2009. “Both aircraft will be MiG-35 prototypes fitted with all the equipment required by the Indian Air Force tender. During the course of this demonstration we will show the main capabilities of the aircraft and of some of the weapons we propose for the tender.” said Belov. According to the tender plans, by mid-2009 two contenders will be chosen, from which the Indians will select their preferred supplier. The winner of the tender will supply 18 aircraft and help to establish the production of a further 108 aircraft at the facilities of Hindustan Aeronautics Ltd in India.

The Russian MiG is designed for service life 2.5 up over existing Fulcrums, it carries increased fuel capacity and has an option for air-to-air refueling (similar to the MiG-29K). The MiG-35 has an increased maximum gross takeoff weight and more flexible ordnance load, utilizing additional hardpoints for external fuel tanks and weapon stations. The MiG-35 uses quad-redundant fly-by-wire system and avionic suite based on open architecture, among the new systems are an active electronic scanning array radar (The Indians will be able to select different radars – Russian or international designs to match with the aircraft), it will also use advanced electro-optical air/air and air/ground targeting systems, also provided by international manufacturers. Survivability has also been improved, with design refinements reducing the aircraft radar cross-section and employment of improved electronic defense systems.

The latest versions of the MiG-29 currently in production is represented by the generation “4++”, characterized by the new MiG-29K/KUB currently in production, scheduled to be delivered to the Indian Navy soon. This shipborne version of the MiG-29 represents the baseline of the new family of fighters offered by the company. It is equipped with quad-redundant digital fly-by-wire system, an improved fuel system and increased combat load. The aircraft is equipped with the Zhuk-ME multimode radar, electro-optical targeting system and target designation capability for passive anti-radiation missiles. It is offered with an ‘open architecture’ avionics bus incorporating Russian or other (international) avionics systems. A land-based version of this aircraft is designated MiG-29M/M2.

Upgrading of older MiG-29s is also underway. The most recent is the modernization of Fulcrums operated by the Slovak Air Force. These MiG-29SD aircraft upgraded with participation of US, German, Czech and Russian providers jointly retrofitting the Russian-made fighters to meet the latest NATO standards. The program included the installation of modern avionics mandated by NATO. The IFF used was made by BAE Systems while navigation and communications systems were provided by Rockwell Collins. The aircraft uses cockpit displays produced in Russia. An important aspect of this upgrade was the formal approval by the Russian Government, which was provided under the “umbrella” contract negotiated and concluded between the Slovakian Defense Ministry and RAC МiG since 2002. The retrofit is done in Slovakia, at the Letecke Opravovne Trencin (LOT) facilities in the city of Trencin. To enhance operational lifespan, the aircraft was equipped with new diagnostic system and new method of performance based logistics (PBL) was implemented, extending the aircraft service life to 40 years and 4,000 flight hours. According to RAC, similar measures are being applied to other MiG-29s operated in Central and Eastern European countries, including Poland and Bulgaria, to extend their air fleets’ combat readiness. For example, in Poland, the Polish Air Force has taken a decision to continue operating their MiG-29s till 2025.

Other upgrades offered by the Russians include the MiF-29SM, a multi-role fighter that undergoes avionics improvement, focusing on operational enhancement regarding air/air and anti-ship weapons capabilities. According to MiG, a prototype of the modernized aircraft has been tested, and serial production of the retrofit has been implemented with initial aircraft entering operational status. The company offers a more extensive upgrade under the MiG-29SMT ‘Generation 4+’ upgrade plan, as well as newly produced aircraft. The program includes the Zhuk-ME radar, partial ‘glass cockpit’ with two multifunction displays and full HOTAS functionality. MiG claims this upgrade entered serial production in 2004 with deliveries currently underway.