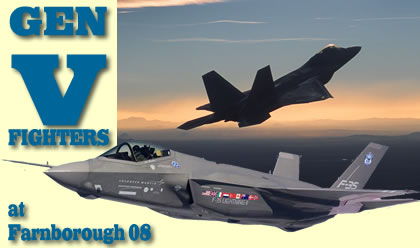 At the airshow, Lockheed Martin’s senior F-22 Raptor test pilot Al Norman provided a play-by-play look at each maneuver the Raptor performed on opening day of the 2008 Farnborough Air Show. He explained how the F-22’s super-aerodynamics becomes a critical factor in close air combat, where the Raptor’s performance is superior to any adversary due to the combination of thrust-to-weight ratio, thrust vectoring capability, multiple, redundant control surfaces and large wing area, all utilized by the flight control computer to maintain super-aerodynamic performance throughout an extremely wide envelope. “The Raptor’s super-aerodynamics, when combined with stealth, speed and 360 degree situational awareness, makes the F-22 the most superior air dominance fighter in the world,” said Norman. A total of 183 Raptors are on contract, and 120 have been delivered. The Raptor was set to make its international public debut outside North America at the Royal International Air Tattoo held at RAF Fairford but the event was cancelled due to bad weather.

Although the Lockheed Martin F-22 Raptor stole the show for the Farnborough Airshow opening day, wit the absence of Gripen and Rafale, the rest of the week was dominated by Boeing F/A-18E/F and Eurofighter’s Typhoon, the later holds yet uncontested position in the fighter aircraft market, with the largest order book for production fighter aircraft in the market, with total orders for 707 aircraft on contract. At present, with Lockheed Martin struggling to extend F-22 production beyond the current 183, and orders for F-35 production beyond the initial phase unconfirmed yet, none of the Typhoon’s competitors can claim higher figures. 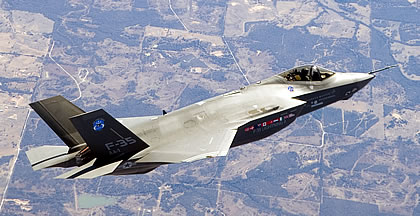 After years of progress, the F-35 Lightning II supersonic, multi-role, 5th generation stealth fighter program is accelerating the pace with two of the three variants in flight tests, and 17 pre-production aircraft in assembly. Yet, one the most crucial phases – actual pricing of the new fighter, is yet to come. The three F-35 variants are derived from a common design and use the same sustainment infrastructure worldwide to replace at least 13 types of aircraft for 11 nations initially.

With the first two production aircraft in fabrication, additional 12 production F35s fully funded and early funding approved for an additional 18 airplanes, negotiations between the lead customers and Lockheed Martin and expected to agree on a unit cost for future production lots, based on multi-year orders. About 372 aircraft could be ordered by the international partners between 2012 and 2016. Initial production aircraft are expected to be released for export in 2014. Lockheed Martin expects its production rate to peak in 2016 at one aircraft per working day, promising to become one of the most ambitious programs in history.

Yet Lockheed Martin hasn’t received firm orders beyond the current low-rate production lot. Furthermore, the company does not provide pricing data for production aircraft, as most cost estimates are based on “2002 dollar” excluding inflation or exchange rate fluctuations. Hence, the unit price for production aircraft, estimated at US$49.5 million for the F-35A, $69.3 million for F-35B and $64.5 million for F-35C could be outdated by now. The US is expected to buy at least 2,443 aircraft of all versions for the US Air Force, Navy and Marine Corps.

Tom Burbage, Lockheed Martin executive vice president and general manager of F-35 Program Integration emphasized the ability of the future lightning II to cooperate in a coalition and joint forces operational environment, gathering and sharing information in real time with different aircraft, troops on the ground and ships at sea. “information the F-35 receives from its sensors or an off-board source can be passed to troops immediately, enabling them to carry out their mission more quickly, more effectively and helping ensure their safety.” Burbage said.

Many air forces are interested in the F-35 program; some have already committed considerable funding for development and testing. The British Royal Navy and Italian Navies are planning to replace their Sea Harriers with STOVL capable F-35Bs. A similar solution is considered by the British RAF and Italian Air Force. Spain is yet undecided but could follow with buying F-35Bs. All together, the U.K. plans to buy 138 STOVL F-35Bs while Italy is interested in buying 131, a mix of F-35A and Bs. Australia and Turkey are interested in buying 100 fighters each, with Israel planning to buy at least 25 (the goal is 75). Canada is expected to decide on the replacement of at least 65 early model CF-18 Hornets by 2012. The F-35A will be considered, against potential competitors such as F/A-18E/F Super Hornet or other future fighters. Other countries considering the F-35 against other alternatives include Netherlands, Denmark and Norway. In all three markets, the F-35A is contested against the Swedish Gripen, which is backed by generous economic incentives to offset these country’s early investments in the JSF program. Eurofighter Typhoon, F/A-18E/F and Rafale are also potential competitors. Similar competition is also expected in Singapore, Japan, and Greece, where details on the actual opportunities or scheduled are not yet available.