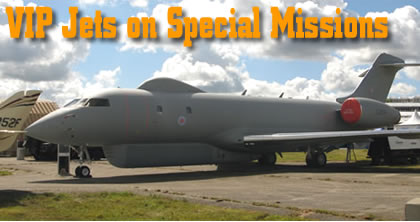 Special mission aircraft were among the hottest military topics at Farnborough 2008, highlighting the crucial role such assets provide for national security and operational capability in modern, asymmetric warfare. Among the new aircraft present at the airshow were the Israeli Eitam based on the G550 business jet, unveiled by Gulfstream and IAI, and the Erieye 2000 AEW&C aircraft based on the Saab-2000 platform. The ASTOR, based on a Bombardier’s Global Express business jet modified by Raytheon to carry the Synthetic Aperture Radar (SAR) was also on display. Other players active in the world market are Embraer is also offering a line of military platforms based on its EMB-145. 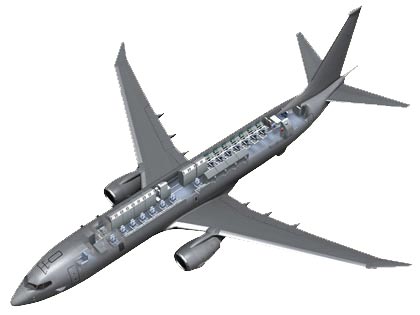 What is making a normal business jet or regional transport aircraft a good Special Mission aircraft? There is no straight forward answer, as the suitability of the platform depends on many factors – operational, technical and economical. Operational aspects critical for such missions are climb rate, operating ceiling and fuel consumption at cruising speed – all translating into lowering operating cost. Since special mission aircraft are operating continuously, in peacetime or at war, operating costs will soon outweigh the initial cost of platform acquisition. Business jets are commonly offering the highest ‘miles per gallon’ economy, and are available at lower acquisition cost, compared to single isle passenger planes such as the Airbus A319 and Boeing 737. However, the larger platforms are selected when requirements for space-and-mission payload require larger cabins, or installation of special equipment (underwing stores, weapons bay or dorsal radar). Military transport planes are also converted to special missions, primarily used platforms operating in third world countries. These include various types of C-130 and the German/French Atlantique 2 maritime surveillance aircraft. 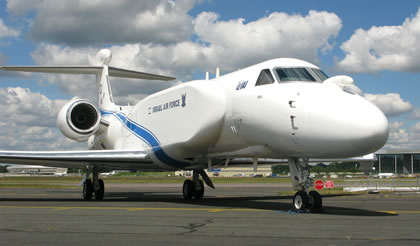 Another aspect under consideration, is the mission the aircraft is designed for. Some missions require heavy modifications to accommodate special avionics such as the Airborne Early Waning (AEW) and SAR radar. Signals Intelligence aircraft carry an array of sensors placed after careful electronic mapping and balancing for optimal performance. Martime patrol and anti-submarine warfare require installation of radar as well as means for droping acoustic sensors for subsurface monitoring and surveillance. Yet, some of these platforms could also have a secondary mission, utilizing its unique performance – support special contingencies as a flying command post, airborne communications and relay or even search and rescue. This flexible and modular approach is implemented with some military transport aircraft such as the ‘pre-wired’ special mission C-130s, using ‘roll-on’ container accommodating specific mission equipment, or the Israeli G550, utilizing an external ‘canoe’ shaped sensor pod fitted to the forward belly, operated by common multi-mission workstations, converting the aircraft from one mission to another. 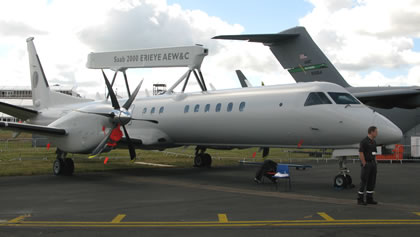 While Gulfstream, Embraer, Bombardier and Saab displayed slick business planes, converted into special mission aircraft, Boeing presented two derivatives of its B-737 passenger plane, modified for a range of special missions, including airborne early warning and control (AEW&C), maritime patrol and anti-submarine warfare and electronic surveillance and signals intelligence (SIGINT). None were actually displayed at the Farnborough airshow, as both aircraft are not yet operational. The first of 114 P-8A Poseidon US Navy aircraft, based on a B-737-800 is in production in the USA while the first three AEW&C platforms, based on the B-737-700 undergoing flight testing for future delivery to Australia and Turkey.

Saab promoted its new range of special mission platforms based on its Saab 2000 commercial turbo-prop powered aircraft. The company is proposing to withdraw aircraft from commercial users and convert them into AEW&C, SIGINT and maritime search missions. Similar modifications were provided by Embraer for its EMB-145 aircraft. Although this platform failed to satisfy a US Army requirement for signals intelligence platform, Embraer claims that there is enough space, power and accommodation for quite demanding missions. Earlier in July Embraer announced a teaming with India’s DRDO to develop an AEW&C aircraft based on the EMB-145.

Finally, Gulfstream and IAI unveiled at Farnborough the first conformal installation of AEW&C performed on a business jet. The system dubbed ‘Eitam’ (Sea Eagle) was developed to accommodate the requirements of the Israeli and Singaporean air forces.

Brazil Embarks on an AEW&C Upgrade