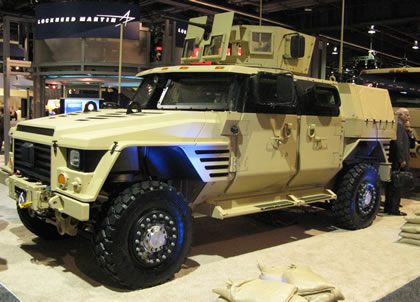 The U.S. Army narrowed the list of potential JLTV bidders to three, awarding development contracts for each of the three teams, to continue the 27 month technology development of the proposed Joint Light Tactical Vehicle. The finalist to be selected at the end of this phase could win orders to deliver more than 60,000 armored vehicles over an eight year span augmenting and replacing part of the 160,000 HMMWVs currently in service with U.S. armed services. According to Lt. Col. Wolfgang Petermann, JLTV Product Manager for the Army the new vehicle will replace part of the HMMWV fleet but is not intended to serve as a direct replacement for that vehicle.

The new program could be worth over $40 billion over the next decade. The Pentagon evaluated proposals and models submitted by six teams, and awarded development contracts to three of the teams. General Tactical Vehicles group, combining General Dynamics Land Systems and HMMWV maker AM General was awarded $45 million; the Navistar-BAE Systems team received $40.5 million and Lockheed Martin, also teamed with BAE Systems received $36 million contracts. The later was a cost plus fixed fee contract while the first two are cost share awards. Three of the losing teams filed protests on the selection decision, causing the Army to issue ‘Stop Work’ order pending a decision by the Government Accountability Office (GAO).

Each of the teams selected will be asked to build four test vehicles during the first 15 months, to be followed by a test phase that could last another year. One or two winning teams will receive Low Rate Initial Production (LRIP) contracts by 2011, to begin production of vehicles, and accelerate production over the next 24 months. According to Lt. Col. Ben Garza, JLTV Program Manager for the US Marine Corps, the test and evaluation phase will include testing of the vehicle’s armor and ballistic hulls, the vehicle and trailers will undergo performance and reliability testing, including assessments from joint warfighters. Furthermore, the teams will have to demonstrate a ‘family of vehicles’ approach across the three payload categories and share a commonality of components, demonstrate technical maturity, requirements achievability and integration capabilities.

While the winners of the contracts will ultimately produce refined prototypes of the vehicles at the end of the current technology demonstration phase, the Army’s current intention is to hold another full and open competition for the system development and demonstration (SDD) phase which will allow all interested parties to compete. The Pentagon is also interested in extending international involvement in program. Australia has officially endorsed the program and is interested to commit by 2010, as the vehicle design is matured. Britain, Israel and Canada are also interested and were reported to be discussing possible co-development funding.

On February 17, 2009 GAO denied protests filed in November last year by three teams that lost the initial selection process of the Army’s Joint Light Tactical Vehicle – Textron-Boeing-SAIC, Northrop Grumman-Oshkosh and Force Protection. The GAO decision will enable Pentagon to launch the 15 month program designing and manufacturing 12 vehicles for subsequent testing, leading to a procurement decision in 2011. After the filing of the protest, the Army issued stop work orders to the winning companies, an action that could have delayed the program by few months.