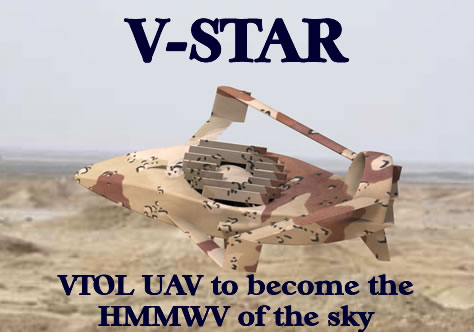 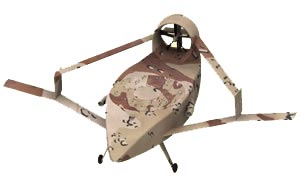 The V-STAR uses a vertical positioned ducted lift fan with counter-rotating blades for vertical flight and hovering. After takeoff the vehicle transitions to forward flight with its “diamond-box-wing” and propelled by the ducted rear pusher fan. Dual Rolls-Royce Model 250 gas turbines will propel the aircraft at a cruise speed of 288 knots with a 400-pound payload for 650 miles. Endurance variations of V-STAR can carry a 110-pound ITARS package for over 19 hours. The long endurance is derived partly form the implementation of Frontline’s patent-pending MicroFire technology, contributing to the high fuel-efficiency and reduced carbon emissions for the Rolls-Royce Model 250 engine family.

The system is extracting heat from the engine through counter-flow heat recuperator, transferring heat from the exhaust air back to the compressed engine air before combustion. Such implementations could double the overall thermal efficiency of the engine. The 50 pound MicroFire system is designed for improved durability and reliability of such system at a low specific weight, improving fuel consumption as much as 40% with low pressure drop and low power loss.