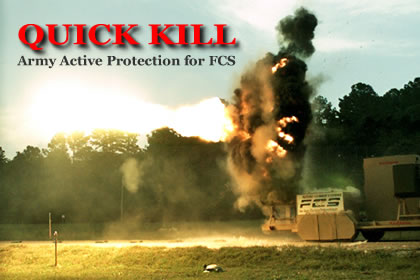 The U.S. Army is developing Active Protection System (APS) as part of its Future Combat Systems ground-force modernization program. FCS is designed to bring Soldiers into the 21st century by equipping them with state-of-the-art vehicles, communication capabilities, sensors and protective systems. The system has been named one of the best inventions of 2008 by Time magazine.

“Think of [it] as Star Wars for Soldiers,” said Time magazine in its Nov. 10 edition. The APS “will automatically detect an incoming round and then launch a missile to destroy it, all within a split second.”

Current Army vehicles lack this level of protection because, he said, they were designed more than a generation ago, before the information technology revolution of the past quarter-century. 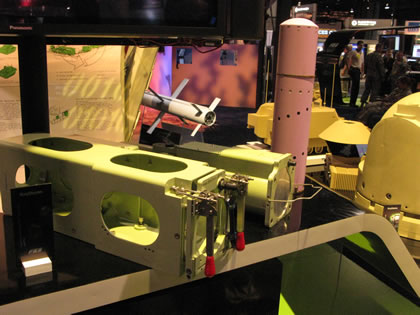 According to the Army’s Training and Doctrine Command, American servicemen and women face a proliferating array of new and more sophisticated threats, which, if not addressed, will jeopardize American lives and mission success.

“Future Combat Systems, the MGVs, the hit-avoidance system, APS,” he added―these all will protect our Soldiers against a variety of changing threats and address current force limitations.”

The Army’s Active Protection System is still in development, but has proven itself in live-fire testing, said Maj. Lewis Phillips, assistant product manager. (see video). Hit-avoidance prototypes, moreover, are scheduled for delivery in 2011.

In addition to being equipped with active protection, the new Army vehicles, or MGVs, also are being designed with an independent hull structure, in which armor is bolted onto the vehicle. This allows for frequent armor upgrades to accommodate technological advances, Army officials said.

The new FCS vehicles, by contrast, are being designed with a v-shaped hull, specifically to help diffuse IED blasts. And the seating inside the MGVs will be suspended from the ceiling of the vehicle to further reduce the shock and trauma of an IED blast.

Army officials said this is significant because, for many of America’s enemies, IEDs have become the weapon of choice.

IED attacks, in fact, account for the majority of U.S. casualties in Iraq and Afghanistan and are a leading cause of brain injury to American servicemen and women. By separating occupants from the floor of the vehicle, which absorbs the blast, Soldiers will suffer much less trauma and injury, Army officials said.

The FCS Active Protection System is being developed by Raytheon. Raytheon won the contract from the FCS program after participating in an open competition that involved other key competitors and competitor systems.

A team of 21 technical experts from various U.S. government agencies, the Army and private-sector industry evaluated competing Active Protection Systems. According to the Government Accountability Office, the team reached “a clear consensus… [that] Raytheon’s Quick-Kill system was the best alternative.”

Army officials said that one key advantage of the Raytheon APS is that it is a vertical launch system. Consequently, it protects against top-attack rounds and thus provides true 360-degree hemispherical protection.

This article is based on a US Army report by John Guardiano, from the Plans Division of Army Public Affairs, with few additions from our ‘Quick Kill’ update.