In the recent month France and Canada deployed Israeli built Heron UAVs to Afghanistan, augmenting US and British Predator and Reaper UAVs already operating in the area. Italy has also decided to buy the Reaper, and the manufacturer, General Atomics Aeronautical Systems, has been awarded a $81 million US Air Force contract for the production of two unmanned aircraft systems destined for the Italian Air Force.

The French drone known as SIDM (Système Intérimaire de Drone Moyenne altitude longue endurance, SIDM) is operating from Bagram air base, north of Kabul. SDIM, an enhanced version of the IAI Heron also known as Eagle, is equipped with a larger nose housing a satellite link, enabling the drone to support both local troops on the ground and intelligence teams based in France. According to the French ministry of Defense, is capable of missions up to 20 hours. France has deployed some 3,400 military personnel in support of ISAF operations, based in Afghanistan, Tajikistan, Kirghizstan and in the Indian Ocean. Of these, 2,800 soldiers are deployed on the territory of Afghanistan.

Boeing is supporting US and Australian forces with Scan Eagle UAVs, Thales, through its Israeli partner Elbit Systems, is providing Hermes 450 services in support of the British forces and most recently, the Dutch forces have teamed with the Israeli company Aeronautics Defense Systems to receive services of its Aerostar tactical UAVs in Afghanistan. The Spanish Ministry of Defense acquired a new version of the IAI Searcher to augment the ISR capability of its forces participating as part of ISAF. Poland has also procured a mini-UAV from Israel, the Orbiter developed by Aeronautics. Another mini-UAV becoming popular among ISAF international members is the Skylark 1 from Elbit System. This mini UAV has demonstrated impressive capabilities operating at high elevations. The German forces are operating indigenous UAV models, including Luna, and Aladin. 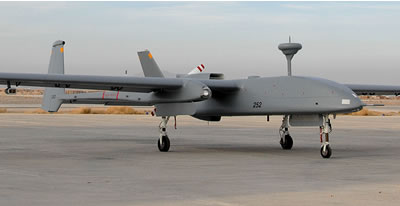