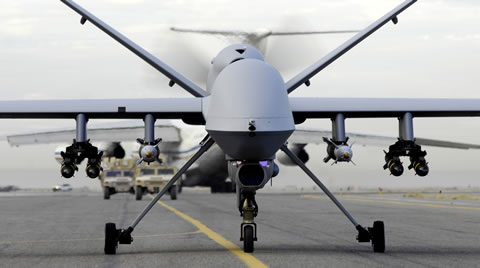 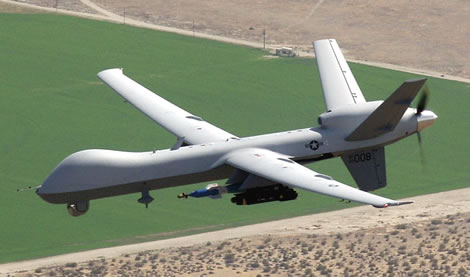 Reaper, (also known as Predator B) an outgrowth of the combat proven Predator A UAS, became operational in 2007 and as it began flying combat missions over Afghanistan. This Medium Altitude Long Endurance UAV overcomes most of the difficulties encountered with previous UAVs that commonly must compromise between conflicting demands for payload, speed, altitude, speed and persistence. With an operational ceiling of 50,000ft, and higher cruising speed, Reaper can cover a larger area, under all weather conditions carrying payloads of more than 1.5 tons. The aircraft is powered by a single Honeywell TP331-10 engine, producing 950 shp, provides a maximum airspeed of 260 kts and a cruise speed for maximum endurance of 150-170 kts.

The Reaper is capable of carrying maximum internal payload of 800 lbs, it will carry more advanced sensors at weight almost twice as the MQ-1. Furthermore, The Reaper can carry much more external stores, up to 3,000 pounds total – 1,500 on each of its two inboard weapons stations, or 500-600 lb. on the two middle stations and 150-200 lbs. on the outboard stations. In total, the aircraft can carry up to 14 Hellfire missiles, compared with two carried on the Predator. The Reaper can stay airborne for up to 14 hours fully loaded.

Trading off some of the missiles, Predator B can carry laser guided bombs, such as the GBU-12. MQ-9 is equipped with both Lynx II SAR and the MTS-B 20″ gimbal, an improved, extended range version of the MQ-9’s EO payload. The availability of high performance sensors and large capacity of precision guided weapons enable the new Predator to operate as an efficient “Hunter-Killer” platform, seeking and engaging targets at high probability of success. It is equipped with an L-3 Communications Tactical Common Datalink (TCDL).

The Air Force is deploying the Reaper with the 42nd attack squadron based in Nevada and operating from forward locations in Afghanistan. By 2009 the service is scheduled to decide whether it wants a full production run. The USAF plans to equip three unmanned attack squadrons in the next decade.

The MQ-9 Reaper will employ robust sensors to automatically find, fix, track and target critical emerging time sensitive targets. In the MQ-9 the SAR was replaced with the AN/APY-8 Lynx II radar, replacing the TESAR with more advanced high resolution radar-imaging system. The ground control segment of the Predator B is common with all previous Predator systems. The USAF is developing the ability to operate multiple aircraft from a single ground station, in effect, multiplying the overall combat effectiveness over the battlefield.

Britain ordered three MQ-9 systems. Their configuration is be similar to that of the USAF operated MQ-9 Reaper, and includes Ground Control Station, Multi-Spectral Targeting Systems, Mobile Ground Control Station, Lynx Synthetic Aperture Radar (airborne), Ku-Band Communications link etc. Although the RAF did not plan to employ its Reapers in armed configuration, such capabilities are integral with the aircraft. According to British MOD sources, during combat operations in Afghanistan on early June 2008 British Reapers did get their chance to drop ordnance on targets, in support of ground forces.

March 2007: The first MQ-9 Reaper unmanned aircraft arrived at Creech Air Force Base, NV this week after completing flight tests in California. This is the first of 18 aircraft to be operated by the 42 attack squadron from this base.

July 2007: The US Air Force is planning to accelerate the fielding of Combat Air Patrols (CAP) maintained by MQ-1 armed Predator Unmanned Aerial Vehicles, from 12 orbits currently operating in Iraq and Southwest Asia to 21 Predator combat air patrols by December 2009. 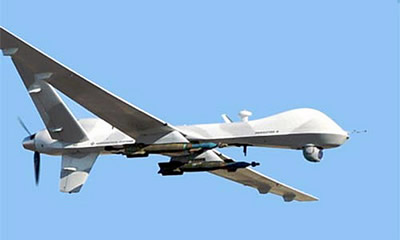 October 2007: First combat mission of the MQ-9 Reaper in Afghanistan. The RAF Announce the deployment of the first MQ-9 to Afghanistan.

Reaper/Predator B UAVs are currently fielded with the USAF, US Navy and the Royal Air Force. Non military users of the Predator B include: NASA and the US Customs and Border Protection. 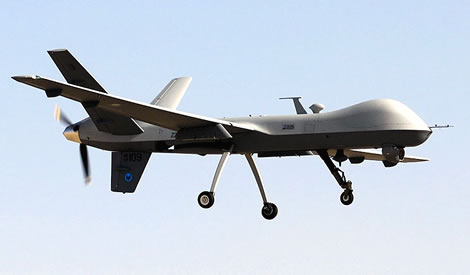