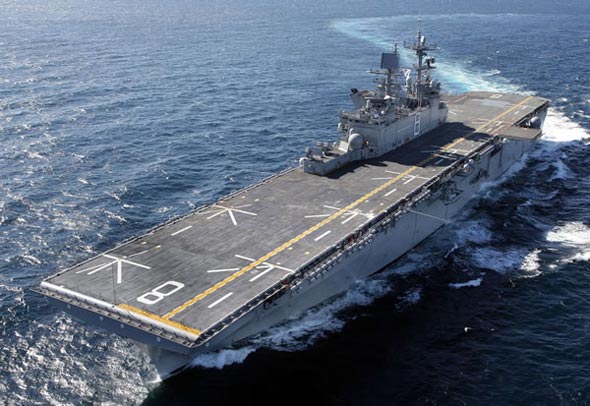 Northrop Grumman Shipbuilding delivered the eighth Wasp class amphibious assault ship Makin Island (LHD 8) to the U.S. Navy on April 16, 2009. Second only to aircraft carriers in size, LHDs are the largest amphibious warships in the world. The vessel will commissioned in October 2009 and based in the West Coast, at the port of San Diego.

The Makin Island is 844 feet long, can reach speeds of more than 20 knots, and has a displacement of more than 41,000 tons. Wasp-class amphibious assault ships are specifically designed to remain off shore near troubled areas of the world, ready to send forces ashore quickly by helicopters, tilt rotor aircraft and Landing Craft Air Cushion (LCAC) hovercraft.

Makin Island is distinguished from its predecessors in the class by its fuel-efficient combined gas turbine and electric hybrid drive known as ‘auxiliary propulsion system’ (APS). Instead of using main propulsion engines to power the ship’s shaft, the APS uses two induction-type auxiliary propulsion motors powered from the ship’s electrical grid. The ship will be able to use its APS approximately 75% of the time, replacing the less-efficient gas turbines. According to calculation done by the Navy, APS could save the Navy more than $21 million in fuel costs over the ship’s lifecycle.

As the centerpiece of a Navy expeditionary strike group, LHDs are fully capable of conducting and supporting amphibious assaults, advance force and special purpose operations, non-combatant evacuation, and other humanitarian missions. LHDs, along with the other ships of an Amphibious Ready Group, embark, transport, deploy, command and fully support a Marine Expeditionary Unit of 2,000 Marines with their gear.