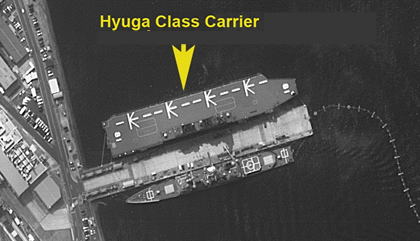 DDH 181 Hyuga, the Japanese Maritime Self defense Force (JMSDF) new ‘Helicopter Destroyer’ was commissioned at the Yokosuka port in Japan on March 18, 2009. Hyuga is the lead ship of this new class of ‘helicopter destroyers’. Two additional ships are planned, the second is already under construction. During World War II Hyuga was one of Japanese Imperial Navy’s battleships, that was converted into a ‘hybrid battleship/aircraft carrier’ in 1943.

The 197 meter long, 13,950-ton flat-deck vessel can carry up to four helicopters on deck and operate 11 SH-60K type helicopters. The ship is operated by a crew of 340 sailors. Japan has clearly stated that the vessel has been restricted to operate helicopters only as Japan cannot possess offensive aircraft carriers under the pacifist constitution. Hence, Hyuga is not equipped with offensive capabilities. Nevertheless, Hyuga is equipped with 16 Mk41 VLS (Vertical Launch System) cells for anti-aircraft and anti-ship missiles and accommodates two 20mm Phalanx anti-missile cannon and two triple 12.75-inch torpedo mounts for self defense.

While its primary function is anti-submarine warfare, the Hyuga will also give Japan its first real power projection capability since 1945. The Hyuga is the largest warship built in Japan since World War II. The Japanese constitution forbids it to have aircraft carriers, which is the main reason it is called a destroyer. The vessel could also be instrumental for disaster recovery missions in the region, prone to floods, earthquakes, typhoons and tsunamis. The new vessel was opened to the public a month later, on April 11.