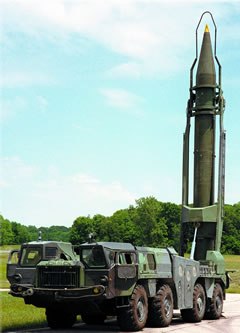 Syria recently launched an improved version of the SCUD-D missile, designed to extend the missile’s range and make it more difficult to intercept, by introducing a separating warhead. The missile can carry a payload of about 700 kg, comprising of high explosive, chemical or biological warfare cargo. The separation of the warhead section makes in difficult for hit-to-kill weapons, seeking the tip of a missile shaped target, since the interceptor must be equipped to perform more complex computation and sense more subtle changes in the target’s behavior, to positively identify the warhead and ignore the exhausted the missile fuel tank and exhausted engine, which provide a much larger and brighter target.

The most recent intercept test perform by the Improved Arrow-2 demonstrated the capability of the Israeli interceptor to identify, track and kill a separating warhead. A similar test failed in 2004, attempted by an earlier version of the Arrow. The Israelis have designed an enhanced target vehicle, known as ‘Blue Sparrow’, tosimulate the trajectory, maneuverability and seperability of missiles such as the Syrian SCUD-D and Iranian Shahab 3. This target missile was used in the recent, successful intercept performed by the Arrow-2 ASIP system.

Reports on Syrian progress in the development of enhanced version of the SCUD have surfaced since 2001, as Syria received the first shipment of SCUDs from North Korea; these missiles were designed to enhance the missile’s range to about 600 km. The first evidence of the Syrian missile upgrade program was realized in 2005, after a Syrian missile diverted from its course and fell into neighboring Turkey. Inspections of remaining parts discovered components that were not in the original North Korean model. Some Chinese made components used in Syrian missile were supposedly used to improve the guidance system. The missile’s range was further enhanced to reach 700 km. The missile’s warhead was also modified to match the chemical warhead the Syrian developed for their North Korean supplied SCUD C missiles. Most recently Israeli sources indicated that Syria began serial production and modifications of Scud C missiles into SCUD D versions, at a rate of 50 missiles per year.

The ‘official’ SCUD-D was developed in Russia, but apparently shelved in favor of the more modern and capable; solid rocket fuelled SS-21 Scarab and its later derivative, the Iskander-M and E (export version). This original, single-stage, liquid fuel powered SCUD-D is believed to have a launch weight of 6,500 kg, its length was 12.29 m and diameter is 0.88 m. The missile could be designed to carry different payload and fuel combinations, providing for different range/payload performance. According to Jane’s missile systems, the SCUD D was originally developed with a separating warhead that represents missile interceptors with more illusive target. Jane’s assumes the separating warhead measures about 25% of the missile length, with a slightly smaller diameter (65 cm). It reports the warhead is equipped with a tip-mounted TV sensor, scene matching computing algorithms and flight control surfaces, derived from the SS-21, enabling the warhead to perform terminal course corrections, providing for final attack accuracy around 50 meter circular error point (CEP). However, despite the similarities between the two configurations it is assumed that the North Korean/Syrian SCUD-D is different from the Russian design with the same designation.