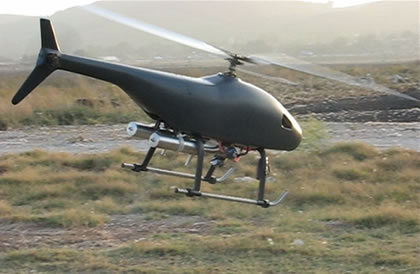 The Israeli company Steadicopter has introduced a lightweight, unmanned rotorcraft designed for surveillance and security applications for military and commercial use. The new helicopter employs a proprietary flight control system enabling fully autonomous operation and use by untrained operators. It will use a new and lightweight multi-sensor payload developed by TopiVision. The company is also working on a larger ‘Black Eagle 60’ that will be capable of carrying a 10kg payload flying 4 hour missions.

The Black Eagle 50 can be used as a flying, robotic observation system for civilian and military applications. The system comprises two helicopters, a communications module maintaining video data-link between the airborne helicopter and the ground control station. The nominal datalink range is 10 kilometers. This distance can be extended up to 150 km, using more powerful gear and directional antennae. The 35kg Black Eagle 50 is designed to carry payloads of up to 3 kg on a three-hour mission. Powered by a 116cc water-cooled engine the Black Eagle 50 can sustain an air speed up to 70 knots (126 km/h) and cruise at 47 knots (85 km/h). It can operate at altitudes up to 9,000 ft, take off and land at winds of 25 knots (45 km/h). At present, the helicopter carries the TopiVision Lev-6 multi-sensor gyro-stabilized sensor payload weighing only 1.5 kg, thus leaving adequate space and weight for additional mission systems. Each helicopter is equipped with the Lev-6 gyro-stabilized, day and night multi-sensor payload weighing only 1.5 kilograms. On the mission the Black eagle flies fully autonomously while the operator controls the payload’s line of sight and footprint from his console. If required, the helicopter can be controlled via the emergency command uplink.

The Israeli company Steadicopter, specializing in the design and development of unmanned rotary-wing platforms has developed a small unmanned rotorcraft employing a proprietary flight control System based on a patent registered by the company’s founders. Established in 1999 as a Technion entrepreneurial incubator company, Steadicopter began its way as a developer of automatic flight control for helicopters. The company also applied this know-how to offer stabilization and controlling of unmanned rotorcraft, applicable for any helicopter of all sizes. The company launched its first unmanned robotic helicopter (RUAV) demonstrator in 2004, demonstrating fully autonomous, vertical take-off, flight between waypoints and landing. In recent years the company developed a complete Unmanned Aerial System (UAS) platform, designated ‘Black Eagle’, introducing  a robust helicopter design, controlled by a flight computer, mission computer and ground control system all developed and produced by Steadicopter. For large platforms Steadicopter has developed a conversion kit, suitable for large helicopters. This kit converts a manned helicopter to an unmanned helicopter.