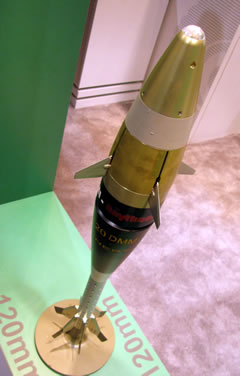 Raytheon and IMI are testing a new type of 120 mm precision-guided mortar round for use with conventional 120mm mortar tubes. The new 120GM DAGGER bomb, developed by an Israel Military Industries-Raytheon team was tested as part of a cooperative research and development program conducted with the U.S. Army in May 09. The GPS/INS guided bomb hit eight out of nine targets during a recent agreement demonstration. The rounds made by an hit short- and long-range targets, demonstrating greater range than current unguided 120 mm high-explosive mortar rounds in the U.S. Army’s inventory. DAGGER is being designed to be compatible with the U.S. Army’s 120 mm Battalion Mortar System.

Dagger is being considered as an alternative to the Army’s PGK program which has been halted for several years.

During the demonstration, the U.S. Army fired DAGGER rounds at a variety of target areas located in mountainous terrain. The rounds were fired under field conditions, including minimum and maximum range and hot and cold round temperatures. Seven of eight rounds reaching the target area landed within 10 meters of their target, a level of precision impossible with an unguided mortar munition. According to Bill Patterson, Raytheon’s DAGGER program manager. “DAGGER has demonstrated a high level of maturity, and we are ready to put it in production and get it to the soldiers in the field immediately.”

Dagger employs a new, weapon-grade hardened GPS/INS module developed by
IMI, providing the guidance and target reference for the bomb. Target data is fed to the bomb’s autopilot before firing, from the fire control system, which also calculates firing solutions, trajectories and hit probabilities. After firing the spring-loaded fins are retracted, stabilizing the bomb by providing divert forces for trajectory shaping and terminal correction, to achieve the high accuracy claimed for this weaopn. A future addition of laser homing system will be used, bringing the Dagger’s accuracy to sub-metric levels.