The U.S. Marine Corps is seeking new ways to support troops fighting in Afghanistan, and is exploring how unmanned vehicles could be utilized for this role. The Marine Corps Warfighting Laboratory’s immediate cargo unmanned aircraft system project has drawn considerable attention from the industry, with offers received form at least four bidders.

The Marines require the autonomous vehicle demonstrator to deliver 10,000 lb. of cargo over a round-trip distance of 150 nautical miles within a 24 hour period, with a minimum lift of 2,500 lb. in 6 hours. Such vehicle should be able to hover out of ground effect at an altitude of 12,000-15,000-ft. above sea level and fly at altitudes of 18,000-20,000 ft. with full cargo load. The Marines are looking for a vehicle that can operate autonomously beyond line of sight, and be controlled remotely at the cargo delivery location.

Among the known bidders are Boeing, offering the long-endurance A160T Hummingbird lifting up to 2,500 lbs; Lockheed Martin offering and Kaman offering the unmanned version of the K-Max external-lift helicopter that can haul cargo loads up to 6,000 lbs; Canada’s MMIST, introducing an autogiro powered CQ-10A SnowGoose cargo UAV and Northrop Grumman offering the MQ-8B Fire Scout carrying about 400 and 600 lbs of payload respectively. A dedicated vehicle also developed for this role is the Israeli MULE, which will not be ready for the Marine Corps schedule.

Another version of an optionally piloted helicopter recently tested by the Marine Corps warfighting Lab is the Boeing OH-6 ‘Little Bird’. This helicopter is currently used by the Special Operations Command and is a likely candidate for the future Armed Reconnaissance Helicopter. 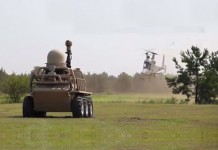 K-MAX Crashes on a Mission in Afghanistan

K-MAX to Stay in Afghanistan Until the 2014 Withdrawal